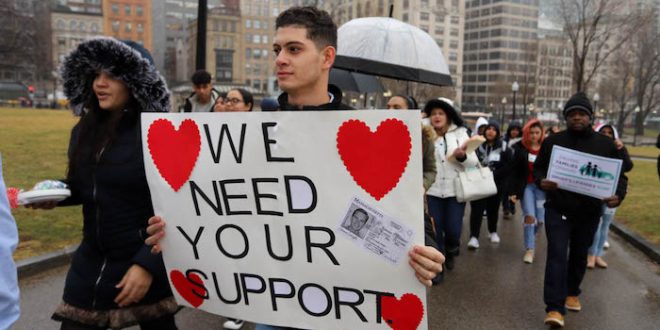 Bruno Moreira was among the marchers carting Valentine's Day cards, candy, and cupcakes up to the State House on Thursday from 32BJ SEIU's downtown headquarters to ask or thank lawmakers for support of a bill to make driver's licenses available to undocumented immigrants. [Photo: Sam Doran/SHNS]

In a span of two weeks, lobbying efforts around a bill that would make it possible for undocumented immigrants to receive standard Massachusetts driver’s licenses transformed from a hunger strike to Hershey’s kisses.

A group of teenagers — some the children of immigrants and some immigrants themselves — marched to the State House Thursday from the downtown office of the union 32BJ SEIU, armed with valentines and sweets for lawmakers.

Chocolates and cupcakes were stamped with the messages “Driver’s Licenses Now” and heart-shaped notes came in two varieties: thank-you cards “returning the love” to legislators who have already backed the bill, and requests for others to “Have a heart” and support it.

Some of the young advocates made the trek from Martha’s Vineyard to Boston for the lobby day, getting up at 5 a.m. to catch a morning ferry.

Melissa Lacerda said she and her parents, Brazilian immigrants, are “lucky enough to be citizens,” but see how stressful it is for others they know to rely on relatives and the island’s limited bus service to get around.

“It means freedom,” she told the News Service. “It’s everything that this country stands for.”

The Transportation Committee, on a 14-4 vote last week, endorsed and advanced a bill (S 2061) that would allow people who are unable to prove lawful presence in the United States, or who are ineligible for a Social Security number, to apply for a license if they meet all other qualifications and provide satisfactory proof of their identity, date of birth and Massachusetts residency.

The vote was held the day of a committee reporting deadline, and three days after immigrant activists with Movimiento Cosecha launched a hunger strike calling for the panel to report the bill favorably.

Before the lobby day participants headed to State House Thursday, several told stories they planned to share in meetings with legislators and staff, including tales of undocumented parents who fear getting deported when they drive illegally to work, skipped hospital and shopping trips, and the challenges of taking infrequent public transit to jobs and volunteer positions.

“We cannot wait another year for this,” said Aracelis Flores, an Everett High School freshman whose parents have temporary protected status.

Sen. Jamie Eldridge, a bill supporter who attended the event, said personal stories can have an impact on lawmakers. He said the licensing bill has been filed for at least 10 years, and some changes in dynamics may have helped it gain traction this session.

“I think that a larger percentage of the new legislators over the past four years support the bill, and that’s everything from more diversity to younger legislators that to them this is a no-brainer,” said Eldridge, an Acton Democrat who chairs the Senate Progressive Caucus. “I also think however, though, it’s partly that there’s a lot more primary challenges happening now, so I think there’s more pressure on Democratic legislators to actually pass progressive legislation.”

Republican Gov. Charlie Baker opposes the bill. Senate President Karen Spilka, an Ashland Democrat, has voiced support for it — Eldridge said Spilka’s backing has “helped move it along and [is] probably why the bill was sent to the Senate.”

Baker discussed his stance during a WGBH Radio interview Thursday.

“I’ve said for a very long time that I have a problem with issuing licenses to people who are by definition undocumented,” Baker said. “And I’ve also said that I don’t think ICE should be in the business of worrying about people who are working and paying their bills — and, by the way, paying taxes in many cases as well — that they should be focused on the very bad actors that I think everybody could agree, if they commit a terrible crime and they get convicted of that crime, they should go back to the country where they came from.”

He continued, “No one’s ever been able to convince me that you can run a program like this without worrying about the issues associated with security.”