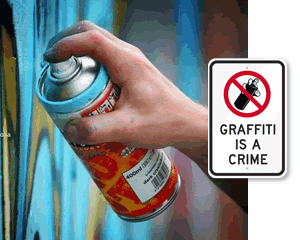 On Thursday, December 12, 2013 Mayor Jon Mitchell joined with representatives from the Department of Public Infrastructure, New Bedford Police Department, SeeClickFix, and members of the local artist community to announce, Graffiti Free NB, the City’s new comprehensive approach to graffiti prevention and removal. As part of the announcement, the Mayor unveiled a new free app for smart phones that residents may use to report graffiti, and request tree trimmings and pot hole repairs.

“Graffiti can have a very negative effect on neighborhoods. It diminishes property values and invites further vandalism. As a community, it is important that we work together to address this quality of life issue,” said Mayor Mitchell.

The Mayor’s concern about the negative effects of graffiti led to his establishment of Graffiti Free NB, a prevention and removal campaign to combat graffiti. The initiative makes reporting graffiti to city government a quick, simple task and faster reporting will help city crews to respond and remove it more quickly.

New Bedford residents may now report graffiti to the City of New Bedford in three easy ways; through a mobile app program, via the City of New Bedford website, or by phone. NB Connect, the City’s new mobile app program is an extension of the Commonwealth Connect grant program that the City of Boston awarded to New Bedford. SeeClickFix, a Connecticut-based vendor partnered with the City of Boston to develop this unique, citizen-friendly mobile application. Simply search “Commonwealth Connect” in the Apple or Google Play Store and download the free NB Connect app onto a smart phone and use it to report non-emergency issues and upload related photos in real time.

Residents may also use NB Connect (http://newbedford-ma.gov/nbconnect/report_issues.html) to report pot holes and make tree trimming requests. With NB Connect, residents’ requests are transmitted directly to the city department and employee coordinating the City’s response to the issue. NB Connect adds a sense of transparency and accountability to the reporting process by enabling residents to monitor the status of their request as well as those submitted by their fellow citizens. Citizens will also receive email notifications regarding the status of their request.

Mayor Jon Mitchell stated, “When I first came into office, I kept paint cans in my car so that I could cover graffiti whenever I saw it on public property. Now, I can simply take a photo of the graffiti with my phone, and report it directly to the Department of Infrastructure through NB Connect and just wait for the email notification that it has been addressed. I use it. I encourage everyone else to use it too.”

Residents without access to a smart phone may still quickly and easily report graffiti. A web-based version of NB Connect is accessible on the City of New Bedford website at www.newbedford-ma.gov. Residents may also call Donna Amado in the Department of Public Infrastructure at 508-979-1550 Ext.506 to report graffiti.

This fall, the Department of Public Infrastructure acquired new equipment to help city crews combat graffiti. The new EcoQuip can remove graffiti from various surfaces including metals, concrete, brick, wood, and marble by using a fine abrasive grit, water, and an air compressor. With this new tool, the City is able to remove graffiti more quickly and effectively.

Graffiti Free NB also aims to deter graffiti vandalism. Through the Graffiti Reward Program, the City will issue a $500.00 reward to anyone who reports material information to the New Bedford Police Department that leads to the apprehension and conviction of anyone who has defaced public or private property with graffiti.

Mayor Mitchell added, “This is an additional incentive for residents to be vigilant, take pride in their neighborhood, and to report vandalism as soon as they see it.” Citizens must call the New Bedford Police Department to report this type of information.

Graffiti Free NB also seeks to distinguish vandalism from the art created by members of the City’s burgeoning artist community. New Bedford is home to many talented artists and in 2014 the City will call upon the artist community to design and paint public murals in designated locations. The Office of the Mayor will partner with 3rd Eye Unlimited, the UGLY Gallery, and NB Beautiful to organize and sponsor public murals in a variety of locations.

Mayor Mitchell stated, “The mural program will provide an outlet for artists to express themselves in a big way that will contribute to the community.” More information regarding the mural program and the submission process will be released in early 2014.