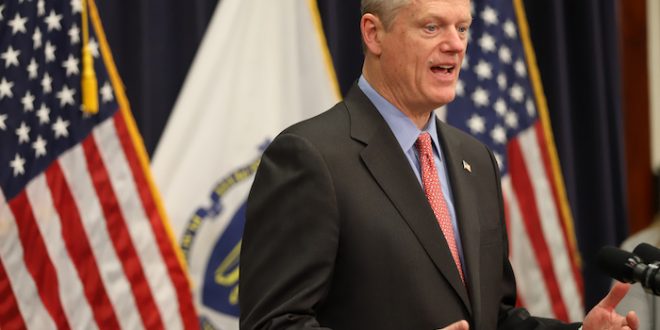 Gov. Charlie Baker declared a state of emergency on Tuedsay amid a rising number of coronavirus cases in Massachusetts. [Photo: Sam Doran/SHNS]

The number of veterans who have recently died at the Holyoke Soldiers’ Home has climbed to 13, six of whom tested positive for COVID-19, Gov. Charlie Baker said Tuesday afternoon as he pledged to “figure out what happened” at the home.

The state-run facility that cares for a little more than 250 veterans was placed under the control of a new leader and a clinical command team Monday after Superintendent Bennett Walsh was put on paid administrative leave.

The mayor of Holyoke, Alex Morse, said Tuesday in a Facebook video that he got an anonymous tip Saturday morning about conditions and “the gravity of the situation” at the soldiers’ home and then spoke with Walsh on Sunday, which was the first he learned about deaths at the facility.

“The superintendent let me know that there had been eight veteran deaths between Wednesday and Sunday without any public notification, without any notification to my office, and also just no notification to the state government that oversees this facility in the first place,” Morse said. He added, “If they followed guidelines, we would have been notified and we weren’t.”

Baker said Tuesday afternoon that he, Lt. Gov. Karyn Polito and Health and Human Services Secretary Marylou Sudders first learned of the situation at the soldiers’ home Sunday night when they spoke with Morse.

“We will get to the bottom of what happened and when, and by who,” the governor said. He said the state’s priority right now is to stabilize the Holyoke Soldiers’ Home and ensure the residents there are properly cared for. Baker added, “We will figure out what happened and we will deal with that.”

Tuesday afternoon, U.S. Rep. Richard Neal said he was shocked to learn of the deaths in Holyoke and that the news was “even more personal to me because I have an uncle who is a full-time resident there.” He said he has spoken with Sudders and the Mass. Nurses Association “to share my concerns about the conditions at the home and to learn more about their plans to move forward.” Neal also said he plans to discuss the situation there with the governor directly. “Simply put, there must be accountability for what happened in Holyoke,” Neal said.