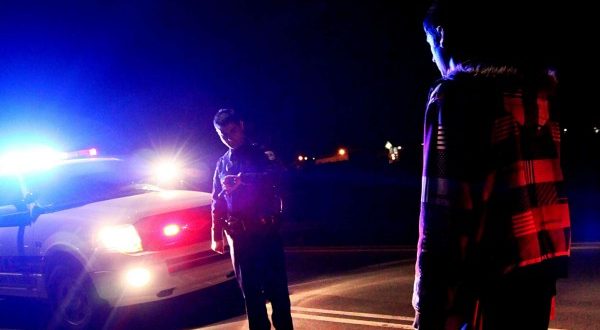 Five years after voters legalized the recreational use of marijuana, Gov. Charlie Baker on Wednesday returned to his stalled effort to crack down on impaired driving by refiling legislation that would set ground rules for enforcing laws that ban driving while under the influence of drugs.

Baker said the legislation, which he rebranded to honor the late State Police Trooper Thomas Clardy, focuses on “equalizing alcohol and marijuana,” and he expressed frustration that the Legislature hasn’t acted more quickly to address concerns about driving while high.

Since marijuana became legal in Massachusetts, the state has struggled to come up with a framework for enforcing impaired driving laws given the limitations of roadside tests for marijuana, compared to those available for alcohol, and the fact that marijuana can remain in someone’s system long after use.

“Unfortunately, our road safety laws have not caught up to the current public safety landscape with respect to impaired driving,” Baker said, announcing his legislation from the district courthouse in Worcester.

Baker first filed the legislation before the COVID-19 pandemic in January of 2019, but couldn’t push it through the Legislature, where the Judiciary Committee referred the bill for further study.

Like that bill, the governor’s new legislation would adopt the recommendations of the Special Commission on Operating Under the Influence and Impaired Driving by suspending the license of someone suspected of operating under the influence of marijuana for six month if they refuse to take a chemical test for impairment.

The bill would also prohibit drivers from having loose or unsealed packages of marijuana in their cars, in the same way open containers of alcohol are prohibited.

Baker said his new bill would be named after Thomas Clardy, a trooper who was killed in 2016 when he was struck by an impaired driver while performing a routine traffic stop on the Massachusetts Turnpike. A blood test conducted on the man responsible for Clardy’s death revealed the presence of THC, the main psychoactive compound in marijuana, but he was never convicted of driving under the influence of an impairing substance.

David Njuguna, instead, was convicted of involuntary manslaughter and homicide by reckless operation of a motor vehicle.

“More needs to be done to keep our communities safe from the dangers of impaired driving and I think this bill is a great start to do just that,” Early said.

Clardy’s widow, Reissa Clardy, joined the governor at the press conference where she said no family should have to endure the “emotional, mental and physical impact” that followed the death of her husband.

“There will always be a feeling of emptiness that will never be filled,” Clardy said. “My family and I feel that by implementing the Thomas Clardy Law it will provide measures that will improve roadway safety and prevent another senseless tragedy, another family torn apart by the loss of a loved one.”

Baker pushed throughout 2019 to see his impaired driving legislation get consideration in the Legislature, holding events and launching public awareness campaigns focused on the dangers of impaired driving. But after being heard by the Judiciary Committee in November 2019, the panel dumped the bill in a study order in 2020.

Still, Baker said he he didn’t know why the legislation failed to gain traction, despite being based on the recommendations of a commission created by the House and Senate.

Baker’s bill would also authorize the courts to take judicial notice that ingesting THC does impair drivers, and directs the municipal police training committee to expand training of drug recognition experts, who would be newly allowed to testify as expert witnesses in civil and criminal cases.

The bill would also legally recognize the effectiveness of the horizontal gaze nystagmus field sobriety test, and allow police officers to seek electronic search warrants for evidence of chemical intoxication, with all blood draws required to be authorized by a magistrate after a probable cause showing and performed by a medical professional.

“The courts can’t pursue information, guidance, expert testimony unless there’s a statutory framework for them to do that. So we’ve already lost two years, okay? And none of that was available when Trooper Clardy got rear-ended,” Baker said.

Law enforcement last session supported the governor’s legislation, but advocates behind the successful push to legalize recreational-use marijuana complained that not only does marijuana impact people differently, but it can remain detectable in the body long after its use and its effects have worn off.

The ACLU of Massachusetts, which participated in the special commission, objected to the idea of license suspension for refusing to take a chemical test due to the limitations of testing and science to determine marijuana impairment.

Mary Maguire, director of public and government affairs for AAA Northeast, said roughly one-third of all roadway deaths in the United States can be attributed to drugs or alcohol.

“Cannabis and prescription drug use have complicated the equation making polysubstance abuse a growing concern. And just because recreational marijuana is legal, it’s not safe for drivers to use. So don’t drive high,” she said.

Maguire said she “shuddered” to think what might have happened to an impaired driver in the situation she found herself in last Monday night, when a deer darted out 10 feet in front of her car. Maguire said the collision was unavoidable, but she was able to brake immediately, reducing the impact.

The National Highway Traffic Safety Administration recently reported that traffic fatalities have reached a 15-year high in the first six months of 2021, with more than 20,000 deaths.

According to the administration, a NHTSA’s review of five trauma centers, including one in Worcester, found that 56 percent of seriously or fatally injured drivers tested positive for at least one impairing substance, up from 50.8 percent before the pandemic.