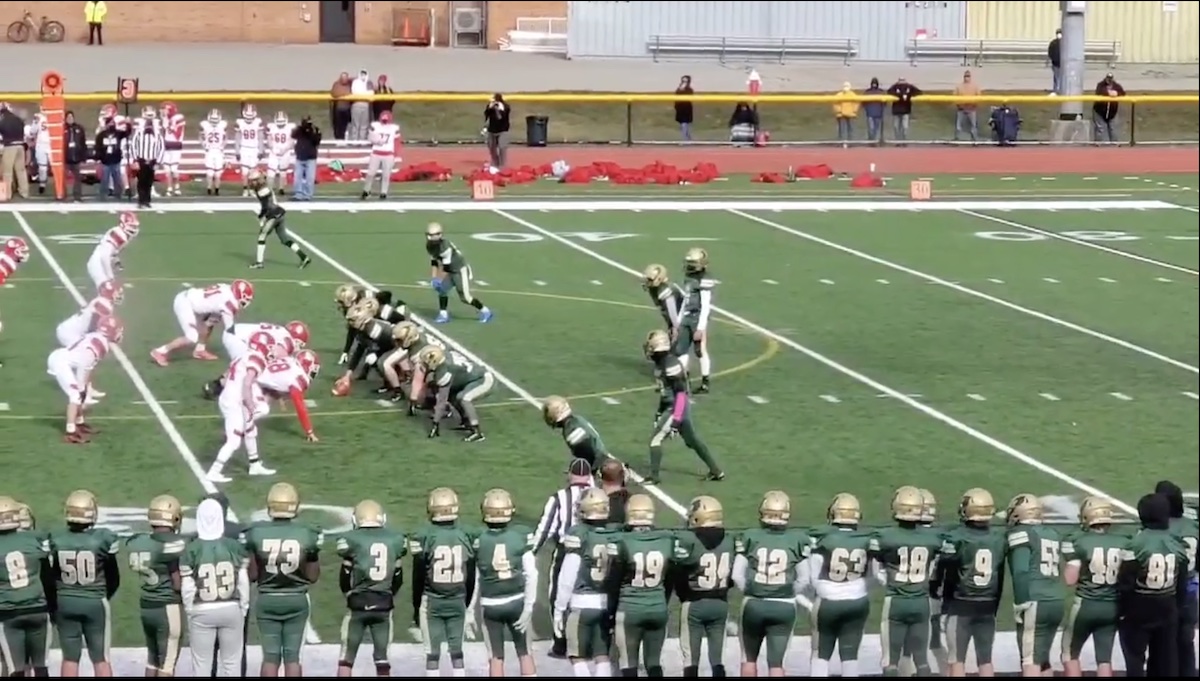 Watch out, the GNB Voc-Tech passing attack is starting to come together.

After a rough debut against a dominant Apponequet defense, the Bears’ new-look offense started to take shape on Friday afternoon during a 17-14 loss to Old Rochester at Jeffrey E. Riley Stadium.

Junior quarterback Cam Lynch — who completed just a quarter of his pass attempts for 66 yards in Week 1 — threw for 185 yards and two touchdowns on 15-of-28 passing, connecting with both his top receivers, Kyle Langlois and Heiser Cacho, on long touchdown throws.
“The coaches came up with some plays and we executed them well,” Lynch said. “I like it. It’s a good offense. It’s pretty easy to read.”

Langlois, who was held without a catch in the jBears’ opener, was able to find open space constantly, even forcing ORR to replace its cornerback on his side. Langlois finished with seven grabs for 120 yards and a touchdown.

“Kyle, he’s my main target, probably,” Lynch said. “It opens up the field more and gives the defensive more to think about.”

“Kyle is a ballplayer,” said Bears head coach Justin Cruz. “Last week lit a fire under his butt. The biggest thing we told him was to drown out all the noise. Don’t listen to what the other team is saying. Focus on what you’re doing and he came out and did that this week.”
Improved offensive line play gave Lynch more time to go through his progressions. He connected with Cacho six times for 60 yards, a touchdown and a two-point conversation.

“The offensive line, I appreciate them,” Lynch said. “They’re my hogs.”

“It was a big point of emphasis was blitz periods and giving Cam some time to throw a little bit,” Cruz said. “Also, his ability to work the pocket a little better helped us. Last week we were turning into pressure. It was a better week for us, for sure.”

PLAYER OF THE GAME
Take your pick between Lynch, who also ran for a team-high 43 yards, and Langlois.

THE BIGGEST PLAY
Once again, there’s two to choose from. With two minutes left and Old Rochester up 14-6, senior quarterback Ryon Thomas kicked a 27-yard field goal to make it a two score game. That would prove to be the difference when Lynch hit Cacho on a 40-yard touchdown heave on the game’s final play, then converted the two-point attempt by once again finding Cacho in the end zone.

But even before Thomas’ kick, the Bears had a chance to potentially tie the game. A 26-yard catch from Lynch brought the Bears down to ORR’s 8-yard line late in the third quarter. After a one-yard run by Lynch, the Bears faced 3rd-and-goal from the 7. After back-to-back illegal procedure and delay of game penalties, a 5-yard run by Lynch and an incomplete pass made it 4th-and-goal from the 12. Lynch tried to find Langlois in the end zone, and pass interference was called when the receiver tried to come back to the ball.

But a new rule meant Voc-Tech didn’t receive a first down, and instead had to replay fourth down from the 3-yard line. ORR’s Jared Achorn met Joe Brightman at the line of scrimmage for the stuff.

“That killed me,” Lynch said. “I’m going to be sleeping on that tonight, for sure.”
THE GAME PLAY

Old Rochester opened the game with a long, steady drive. The Bulldogs chewed up nearly seven minutes with a 15-play, 70-yard possession capped by a 6-yard touchdown run by Thomas.
The middle two quarters turned into a turnover fest, starting with Cacho tipping an interception to Avery Sylvia, who ran it back 24 yards. Two plays later, the Bulldogs’ Jayven Pina Francis came up with a pick of his own.

With 2:08 to play in the half, Lynch found Langlois for a 37-yard gain, then followed up with a 23-yard pass play to make it 7-6, a score that stood until the third quarter.
But that doesn’t mean there wasn’t more excitement in the second quarter. Sylvia came up with his second interception of the day to end Old Rochester’s next possession, kicking off a string of turnovers.

ORR’s Stephen Old picked off Lynch three plays later, and two plays after that Voc-Tech’s Ed Fragata recovered a fumbled snap. Amazingly, there were five turnovers in the second quarter, but none led to points.

ORR took its first possession of the second half 66 yards on nine plays, six of them Arne runs. He finished it off with a 25-yard tackle-breaking touchdown run that put him over the century mark on the ground and gave the Bears a 14-6 advantage with five minutes left in the third.

Voc-Tech’s next possession was the one described above, when it reached the Bulldogs’ 7 but was unable to score. After a pair of punts, ORR got the ball back with 6:43 to play and was able to wind 4:43 off the clock with an 11-play drive that ended with Thomas’ game-winning field goal.

Voc-Tech’s final possession went 67 yards on seven plays, ending with Cacho in the end zone and the clock reading all zeros.

QUOTABLE
Cruz: “It’s just nice to be out here and be competitive. We’re getting better each week and that’s showing. What we’re doing in practice is working. The players are buying into it. I think if we prepare again next week, we can play better every week.”

THE NOTES
ORR finished with 17 first downs to seven for Voc-Tech, even though the Bears had four more yards of offense in the game. … In addition to his fumble recovery, Fragata also had a sack. … Voc-Tech didn’t allow ORR to complete a pass after the first possession. … In addition to the five turnovers, there were also five fumbles recovered by their own team.