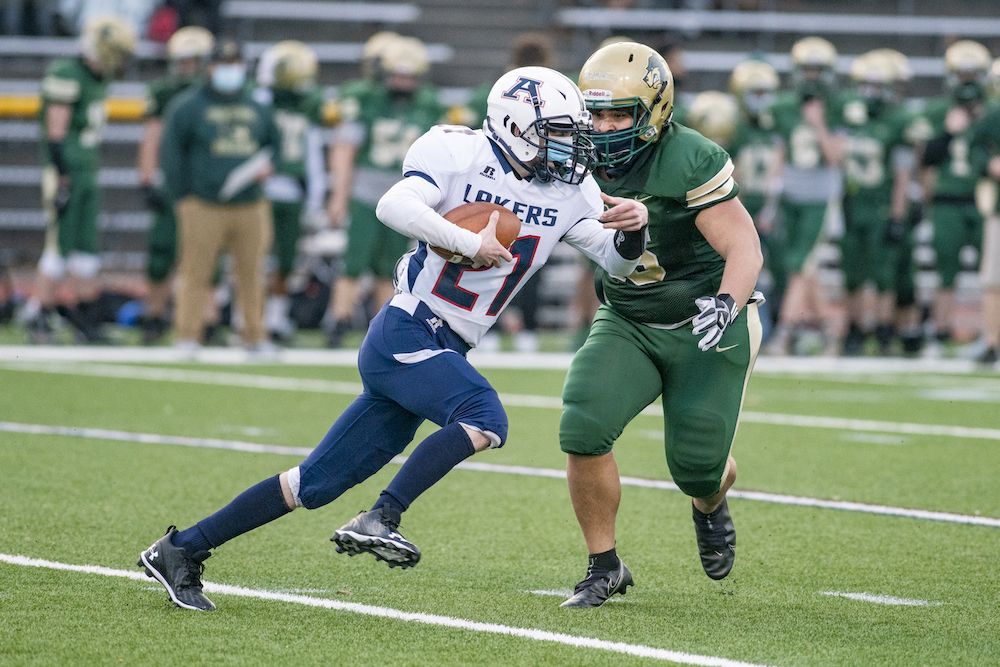 That certainly wasn’t how the GNB Voc-Tech football team imagined its season starting.

Riding the optimism of a 2019 playoff appearance, there were high hopes that the Bears would prove they belong in the upper echelon of the South Coast Conference when they hosted Apponequet in both teams’ season openers on Friday afternoon at Jeffrey E. Riley Stadium. But then the Lakers ground game got going and piled up 391 rushing yards in a 45-7 victory.

“We have a lot to work on,” head coach Justin Cruz said. “This was our first game in more than a year. You can’t take anything away from the fact that I think (Apponequet) is one of the strongest teams in our conference with those horses back there.”

“For us, it was poor tackling,” Cruz said. “We talked about that a bunch as a team. Not to take away from (Hughes), he’s a great back, but there were a lot of times where we would meet the guy at the line and he’d break a couple tackles.”

The Bears’ struggles weren’t limited to the run defense, however. The offense gained just 117 total yards, and 56 of those came on a single pass from Cam Lynch to Avery Sylvia late in the second quarter.

Voc-Tech had 11 possessions in the game. Seven ended in three-and-outs. Two possessions lasted just three plays before a Lakers interception. In all, the Bears had two first downs and 51 rushing yards.

Part of the problem was how well the Lakers were able to contain talented senior Heiser Cacho, who did get free for an 87-yard kickoff return touchdown in the second quarter. But Cacho ran for a mere two yards on seven carries, adding two catches for 10 yards.

Lynch ended up leading the team in rushing with 42 yards on nine carries.

PLAYER OF THE GAME
Hughes, easily. He nearly ran for 300 yards. He found the end zone three times. He even recovered a fumble, recorded a sack and caught a 12-yard pass.

THE BIGGEST PLAY
Late in the second quarter, with Voc-Tech trailing 21-7, Lynch connected on back-to-back passes to Cacho and Sylvia for a combined 64 yards, setting the Bears up with 1st-and-10 on Apponequet’s 12-yard line. A touchdown would have sent Voc-Tech into the locker room trailing by just one score. But instead, the Bears surrendered two sacks and threw an incomplete pass before fumbling the ball away on 4th and 35. The Lakers would score the game’s next 24 points.

THE GAME PLAY
Cole Dixon got the scoring going for the Lakers, running 20 yards untouched before bowling over a would-be tackler on a 26-yard scoring jaunt midway through the first quarter.
The Lakers extended their lead to 14-0 on a 13-yard Hughes touchdown early in the second quarter, then got a 7-yard TD run through a wide-open gap opened by the offensive line, making it 21-0 with a little over four minutes left in the second quarter.

That’s when Cacho got loose for an 87-yard kickoff return that he blazed through the middle of the field and then down the left sideline. Jason Ayala kicked the extra point.

Apponequet started pulling away in the third quarter with an 11-yard touchdown by Gorman and a 14-yard touchdown from Hughes. In the fourth quarter, Logan Tsika, who also hit six extra-points, drilled a 43-yard field goal with room to spare, then Hughes wrapped things up with a 75-yard scoring jaunt with a little over four minutes remaining.

THE NOTES
The Voc-Tech defense did force Apponequet to punt four times, but with both teams trading short possessions, that meant the Lakers got the ball 11 times. … The Bears got a sack from Ed Fragata. … Apponequet interceptions came from Mike Henricksen and Gorman. … Kobe DeSousa forced a fumble, Caleb Procaccini blocked a punt and recorded a sack and Timothy Clerc added two sacks for the Lakers. … The Lakers had a 55-yard touchdown pass to Henricksen called back for an illegal hit, but still ended up scoring on the possession.