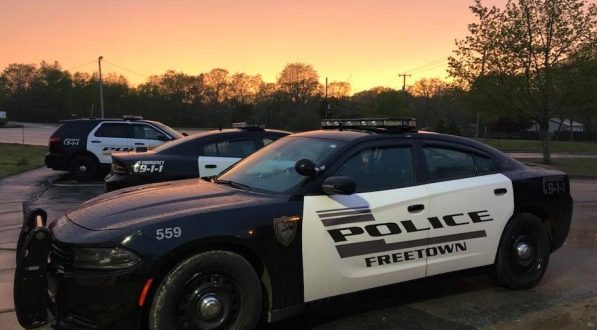 At 8:15 pm on Wednesday, May 6, 2020, Officer Patrick Lee prevented a 39 year old Lakeville man from attempting to commit suicide.

Officer Lee overheard a state police radio broadcast regarding a man walking in the northbound lane of Rt. 140 near Chace Rd. Officer Lee arrived in the area and parked his cruiser on the Chace Rd. overpass. He then walked down an embankment where he discovered the man attempting to throw himself in front of passing vehicles. The man refused Officer Lee’s plea to walk over to a guardrail, and yelled, “I’m done, I’m done, I should have used the tractor trailer.” Officer Lee climbed over a guardrail and entered the darkened highway where he narrowly averted being struck by a vehicle. He then rushed the man, subdued him with the use of a Taser, and dragged him from the high-speed lane and onto the median strip.

Officer Lee then requested Emergency Medical Services from the Freetown Fire Department to respond. The man was transported to an area hospital for a mental health evaluation.

According to Chief of Police Carlton E. Abbott, Jr., the life-and-death drama played out within the span of a few minutes. Chief Abbott remarked, “Officer Lee exemplifies the values of bravery and selfless service. He is a credit to the Freetown police department.”