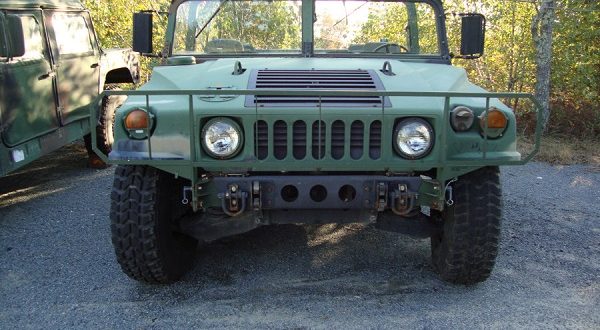 According to police, all of the vehicles were stored on the grounds at the highway department.

On April 18, 2019, police became aware that the two military Humvees had been stolen. Detective Shane Kelley investigated the theft and, in addition to discovering Macomber’s involvement, discovered that Wayne S. Morse, age 28, of Freetown Street Lakeville, was also involved. Police allege that Morse assisted the buyer in removing the two Humvees from the highway department, and subsequently sold one of the Humvees for $8,000. Police allege that Morse misled Detective Kelley during the investigation and that he concealed one of the stolen Humvees. Detective Kelley recovered one of the Humvees at a business located in Raynham.

The police department had acquired the surplus Humvees from the Federal government to be used in the event that one of the Humvees currently being operated by the department required parts or needed to be replaced.

Mr. Macomber was charged with the following crimes:

– Larceny of a Motor Vehicle (2 counts)
– Larceny Over $1,200 (2 counts)
– Embezzlement by a Public Officer
– Mr. Morse was charged with the following crimes:
– Concealing a Stolen Vehicle
– Misleading a Police Investigation