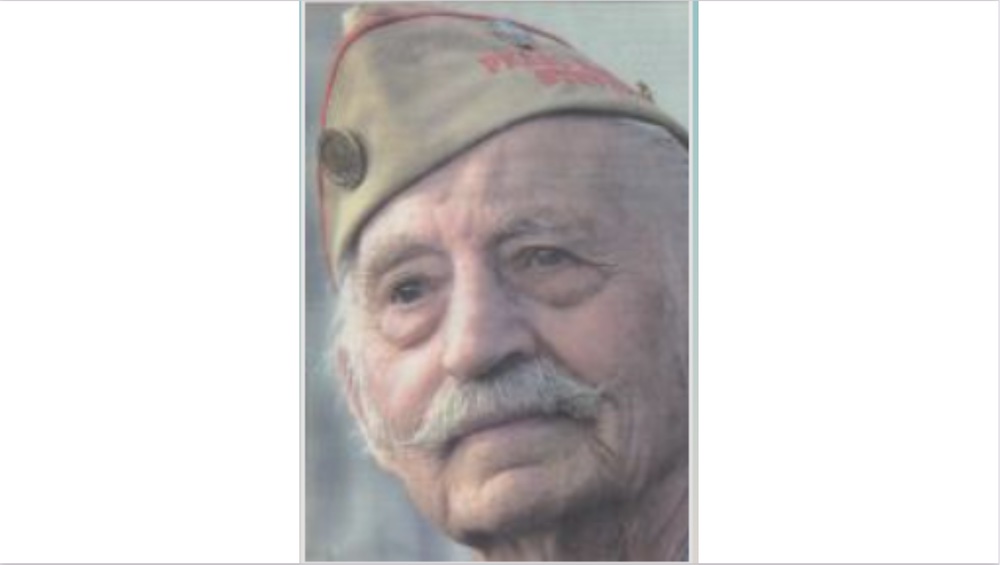 During the month of June, the 34th Lights for Peace flag to fly at the Fort Taber – Fort Rodman Military Museum honors the memory of Manuel “Manny” Martin, Jr. of Wesport, a WWII Veteran and a survivor of the attack on Pearl Harbor on December 7, 1941.

Manny was the son of the late Manuel and Mary E. (Faria) Martin, Sr., and was a lifelong resident of Westport. He passed away on July 30, 2012 at the age of 90, just two months after being interviewed for a television series entitled, Heroes Among Us.

The late Joseph Langlois, former President of the Fort Taber – Fort Rodman Historical Association,
produced this television series, in conjunction with the New Bedford Cable TV, which included a series of interviews with local citizens, who according to Mr. Langlois, “experienced the trauma, the confusion and drama of war. Ordinary individuals who were confronted by extraordinary events that demanded, at times, more than they may have thought they were capable of enduring.”

In May 2012, Mr. Langlois met up with Manny Martin, at his home in Westport, to get a firsthand account of Manny’s experience during the attack on Pearl Harbor. He wanted to know what Manny heard, what he saw, what he smelled and how he felt.

Manny explained that as a young man, he lived and worked on his family’s farm in Westport. As a young man, prior to the U.S. entering WWII, he told his mother that he was going to enlist the U.S. Army. At first, she didn’t take him seriously, but shortly after visiting a recruiting office in Fall River he was on his way to Hawaii. His goal had been to go to Honolulu, so he was assigned to the US. Army Coast Artillery Corps. Within a few days Manny was on his way to Boston to board a ship.

While in Boston, “I was asked to operate a forklift. I was told that I did a good job and I got a choice bunk for my labor,” which made his ride aboard the USS America more comfortable. “A lot of guys were sick, but I wasn’t. I enjoyed the ocean ride.” The USS America was one of the three Kitty Hawk class supercarriers. “I saw Florida and the Panama Canal. I was dumbstruck. I had never been farther than Fall River! The Panama Canal was quite an experience. We went to California and stayed a couple of days. The first time I had ever seen a burlesque show!”

Manny explained that while stationed in Honolulu, he worked on the telephone system in his outfit. There were a total of 52 telephones between the electric power plant, plotting room and two 12” artillery guns.
“A lot of people don’t know how to fire a 12-inch artillery gun. You don’t just pull a trigger. In order to control a 12-inch gun, we had four outposts. I had to maintain all of the phones in every station.” The job of the outposts was to “spot anything and watch and identify. Then they would let the commander know and we’d get the guns ready to fire.” Manny went on to explain that these artillery guns took about 8 men to fire and each had a specific job. The shells were close to 5ft. long and required 272 pounds of gunpowder.

Mr. Langlois compared that to the two 12-inch guns they had a Fort Rodman. Manny explained that these artillery guns were used primarily to attack ships, not planes.

Mr. Langlois began to question Manny about the day of the attack on Pearl Harbor and what Manny was doing at the time. “I don’t think I’ll ever forget it. I was slated to go on guard duty and I was a little upset because I didn’t like guard duty. That meant I had to get up and make early chow. I had just come out of the latrine and two guys and I saw a plane going by with a torpedo longer than the plane. Manny knew right away that it was a Japanese plane but couldn’t believe it. “Pretty soon, you could hear all of the shooting and the torpedo going off and there was one after another. Pretty soon I realized we are at war.”

He continued to explain, “The captain got on the phone and said ‘the Japanese are attacking Pearl Harbor.’ We had 3 anti-aircraft guns and they were banging away. A plane crashed into our machine shop. I don’t know how many men were lost from my unit. I went down to the harbor. Everybody was in shock and didn’t know what we were going to do next. All you could see was fire and smoke. Some of the (ships) were trying to get out of the Pearl Harbor Channel. It was very narrow and if you don’t stay in the middle, you’re going to hit bottom. I heard an awful lot of bombs going off and a steady roll of machine gun fire. So many airplanes, you wonder where they were all coming from.”

Manny described more of what he saw that day. “There was a lot of smoke and the water was nothing but oil with a big slick on top of it with loads of life jackets floating on top. Pearl Harbor channel took an awful shellacking. We took a lot of shellacking. All I know is that we took a beating.”
The following days and weeks “I was assigned guard duty right there on the beach, next to the channel. Our biggest thing was to make sure nothing came into Pearl Harbor without us knowing. We had 4 outposts reporting all the time what was coming in and going out. We expected another attack but it didn’t happen.”

When asked how he felt about the experience, he replied “Everybody felt the same. (Here) we are in a beautiful place and now we’re at war.”

According to Mr. Langlois, the goal of this television series, Heroes Among Us, “was to keep the memory of these brave individuals alive as they experienced these hellish events. We must remember the price of freedom and the sacrifice that these individuals have given, for the people and the country that they love. Their courage serves as a role model for individuals of all ages that when confronted with stress and seemingly insurmountable problems, that we must face them boldly and with courage.”
Prior to his retirement, Manny worked as a carpenter and Union contractor for Local 1305. He was a communicant of St. John the Baptist Church in Westport and enjoyed spending time with his family and friends.

According to his obituary, survivors included his son: Dean Martin and his wife Karen of Westport; his daughter: Kathleen A. Coutinho and her husband Paul of New Bedford; 2 sisters: Louise Costa of Somerset and Angiemae Cane of RI; 7 grandchildren: Steven, Ryan, Holly, Dean, Jacob, Shawn and Nicole; 2 great-grandchildren: Dylan and Thomas and several nieces and nephews.
Mr. Martin was the brother of the late David, John, Ernest, Joseph and James Martin, Mamie Vieira, Lily Smith and Alice Cordeiro.