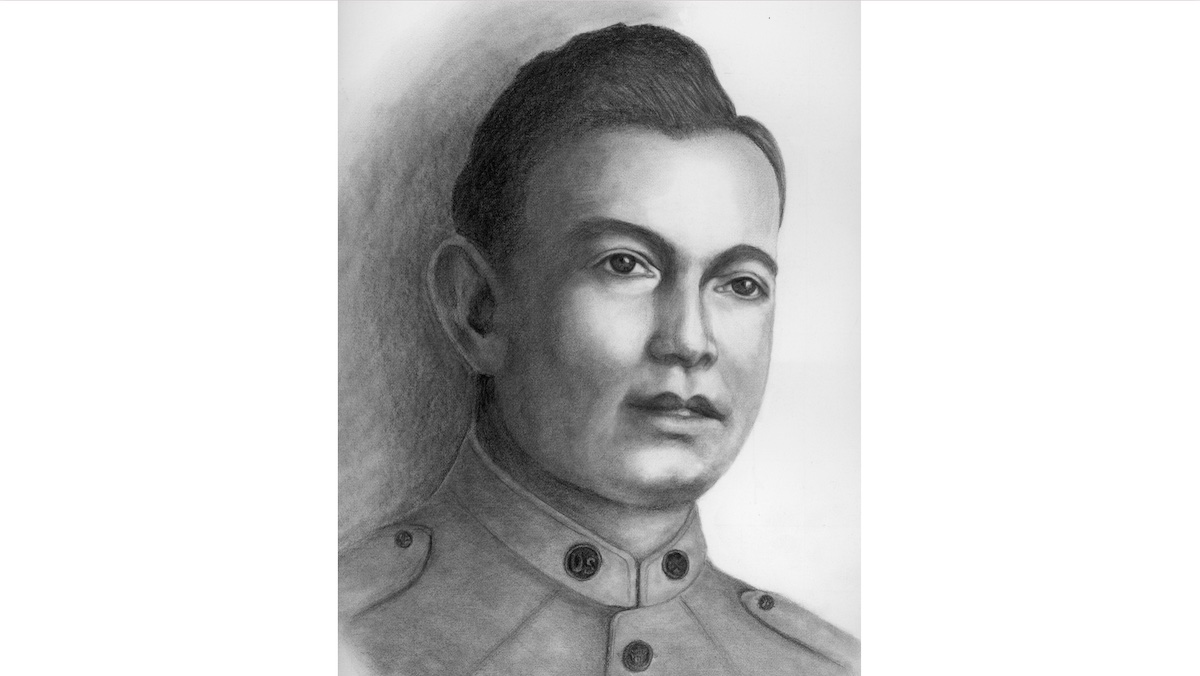 During the month of March, the 19th Lights for Peace flag to fly at the Fort Taber – Fort Rodman Military Museum honors the memory of PFC Joseph J. Monte, the first Cape Verdean to receive the Purple Heart Medal.

Many New Bedford area residents may be familiar with the Monte Park Playground, which is located between Acushnet Avenue and S. Second St., in New Bedford, which is named after the war hero. In 1938, the city of New Bedford honored Joseph J. Monte by dedicating the playground to the veteran’s memory. “Since its creation, the historical site has provided kids from New Bedford’s South Central neighborhood a place to shoot hoops and meet friends,” according to a Standard-Times article.

Joseph J. Monte aka “Jose Jaime Monteiro” was born on the island of Fogo in Cape Verde on November 25, 1888, according to the New Bedford Historical Society. He emigrated to the United States in September of 1900 and enlisted in the United States Army on March 9, 1918. Monte served as a PFC in Company H. of the 307th Infantry, which was assigned to the 77th Division, according to the website history.army.mil.

Monte participated in several battles including the Oise-Aisne Offensive and the Baccarat and Vesle Defensive. According to Carl J. Cruz, of the New Bedford Historical Society, Monte was “wounded on July 5, 1918 at the battle of Alsace Lorraine and despite being wounded, he continued at the Battle of Fismes, where he was seriously wounded.”

According to Wikipedia, “The 77th Division was assigned to the British command where it trained with the British Army until early June 1918. Following the completion of this additional training, the Regiment was moved up to the front in the Baccarat Sector. In doing so, they became some of the first units of the National Army to take front line positions. The Regiment remained there until the end of August, resulting in losses equal to nearly one third of its strength. It was then moved to the Vesle front in the area near Fismes.”
Despite being wounded by enemy fire, Monte continued to fight until August 27 of that same year, when he was seriously wounded. “Unable to move, Monte was captured by the enemy and taken as a prisoner of war to Anhault-Zerbst, Germany. He remained a POW until his release after the war on Dec. 25, 1918, when he was sent to England and hospitalized. After recovering, he returned to the United States and received an honorable discharge on May 22, 1919,” according to the Standard-Times.

After his discharge from the military, Monte moved to New Bedford, MA, married and had three children.

Monte became the first Cape Verdean to be awarded the Purple Heart medal in January 1935, “in appreciation of his distinguished service in defense of democracy,” according to the newspaper. Unfortunately, Joseph J. Monte died on March 26, 1935, just two months after receiving this honor. He is buried in Saint John’s Cemetery, in New Bedford.

On November 11, 1938, Veteran’s Day, dignitaries from New Bedford, including then-Mayor Leo E J. Carney and His Excellency Dr. Goulart da Costa, Portuguese Consul, participated in a ceremony honoring Joseph Monte by naming a playground in his honor. In July 1999, through the efforts of the South Central Neighborhood Assoc., former City Councilor, Joseph “Jo Jo” Fortes and funding from the office of Community Development, the Joseph J. Monte playground underwent a complete rebuild and the park was revitalized. “Everybody had a little bit of something they could offer,” said Ward 4 councilor Joseph “Jo-Jo” Fortes, a member of the South Central Neighborhood Association. “The community at large, from young to old, refurbished this park, giving their time to make sure it was done right,” as stated in a newspaper article.

Much of the details contained in the story were taken from excerpts of previous articles published in the Standard-Times as well as information provided by the New Bedford Historical Society.