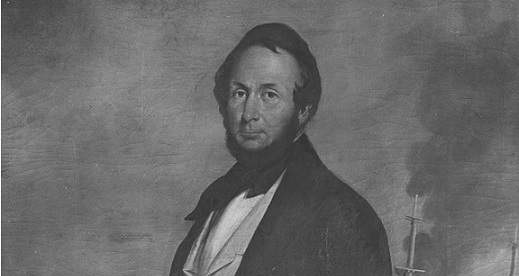 Series Introduction
Welcome to the seventh installment of the series “Historical Personages of New Bedford.” The previous six installments can be found by using the keyword “personage” in the search window in the column at the right or click here.

My intention with this series is to shine some light on the lesser known names and figures of New Bedford’s past.

I won’t focus on the more popular and well-known figures since they have not only been covered in substantial depth, but information about these figures is something most people already have a cursory knowledge of. Though redundant to say, if any more information is desired, it is readily available and easily accessible.

Abraham Hathaway Howland (1802-1887)
A city’s success – or nation’s success for that matter – is indirectly due to the direction dictated by past city officials in a sort of generational domino effect.

While a politician typically spends the majority of his time remedying current issues, each spends a fair amount of time on setting up the future. Fertilizing the economic soil, if you will.

He or she places certain laws or bills into motion that may take a year, a decade or a generation to come to fruition. This makes some officials down the road look really good, but they unfairly get the credit for their predecessors work. Not all, some.

I begin the article with this point, because the economic, social, and educational climate of a city is a result of every mayor to come before. Now, a disclaimer…I am NOT saying that the people don’t play a role. In fact, they probably play a greater role. We vote the officials into office, we vote them out. We approve or disapprove of city proposals.

It is a union between politicians and the people, however you wouldn’t read an article on how John Doe cut out of work early to make it to the polls and played his part in being one of 6,000 that voted on town referendum! Besides, there’s no information on John Doe in 1840 that I could go by!

So, we’ll focus on the “names.” In the case, with this series, the “lesser” names in terms of familiarity. Very few know who the first mayor of New Bedford is, but I bet you’re familiar with his surname: Howland. If you consider yourself a historian or even a pet historian, it is a name you should be very familiar with. The city’s firsts should be an area of knowledge for anyone who professes to know anything about greater New Bedford history.

One of Eleven Children; Born of Quakers
Abraham Hathaway Howland was born of Quakers Weston Howland and Abigail Hathaway in New Bedford, March 2, 1802 – one of 11 children. Abraham H. was actually the second Abraham, named after his “older” brother who died before his second birthday.

His father Weston Howland was a well-known, respected figure in New Bedford; he was a business mogul who bought and sold grain and flour in the 18th century into the early 19th century. He also owned most of the vessels that carried his product to and from his storehouse on Rotch’s Wharf.

Abraham would follow his father’s footsteps, but refused to have things handed to him. Showing his character early on, he began as a clerk and worked in virtually every department of his father’s business. He even captained his father’s vessels at one point which eventually led him to dip into the whaling industry and captain vessels of his own, most notably the 279 tonnage “London Packet.” He maintained a counting room at 13 Middle Street.

This attitude, work ethic and experience would prove to be invaluable and serve him throughout his life. When whaling began to wane, he went directly into the petroleum refining business. He held high positions or was on the boards of many businesses, Burgess & Howland, director with the Whaling Insurance Company of New Bedford, director of the Western Railroad, Committee on Mercantile Affairs, and even the N.B. Fire Department.

Socially he was a member of the Eureka Lodge F. and A.M. which was formed by members of the Star in the East Lodge, and the Sutton Commandery of Knights Templar.

Business First, Politics After…then Business again
In the early 1840s, showing his continuing desire to be diverse, he jumped into politics, and became a member of the Massachusetts State House of Representatives and served from 1843-1846. All the while still running his many businesses, and even expanded his whaling company and increased his fleet with the aptly named Abraham H. Howland, built in 1845. Alas, this vessel would make three trips before being lost at Honolulu in 1852. In 1846, he obtained from the Legislature of Massachusetts a charter to begin to manufacture cotton, wool, and iron under the name of Wamsutta Mills.

Abraham fell in love with and married Mehitable Earle Russell Howland (1810 – 1892) and they had six children, Abigail, Hannah, Abraham H. jr, Alice, Horace and Mary. Abraham jr. would follow his masonic and political footsteps, and served as chief engineer for the city from 1871-1874 and as mayor of New Bedford (and president of the Water Board) himself from 1875-1876.

When the city of New Bedford decided to incorporate on March 18, 1847, he jumped ship from the House of Representatives and ran for mayor. Certainly his economic effect on the city combined with his political experience made him a shoe-in. The population of the city at this time was 22,000.

A.H. Howland became the first mayor of the newly incorporated New Bedford in 1847 and stayed in office until 1851. I’d imagine, his many businesses ventures suffered with his lack of time and direction. So his last term was in 1851 and he returned to his business life.

Helping the Whaling City become the City of Light
Gas for illuminating was first used in New Bedford in 1853. Howland, James B. Congdon and business associates from Pennsylvania helped obtain a state charter and city franchise to use gas for street lighting.

Eventually the Pennsylvania businessmen were bought out and Congdon became treasurer, and William C. Taber became president. Pipes were laid as soon as possible and the first gas lamp for street lighting was turned on on February 14, 1853.

Their first works were at the foot of Bush Street – today called Madison Street. It was a simple brick house with a gas tank that held 35,000 cubic feet, an office and coal shed. Within a few years, they expanded to three acres with three tanks holding a total of 200,000 feet.

This company eventually grew to purchase the New Bedford Electric Light Company and the Edison Electric Illuminating Company who had a plant on Middle Street. By March of 1888 Howland’s company controlled the entire production of light for electricity for the entire city.

In 1857 he purchased the Joseph Ricketson Works and and began to distill oil from coal, along with most of the city’s Alderman, including John Hicks, Weston Howland, and Joseph C. Delano. Kerosene was first distilled in New Bedford in 1858. He was one of many powerful businessmen – William C. Taber, Joseph C. Delano, William Penn Howland, Henry T. Wood and son Weston Howland (who owned Fish Island at one point) that erected a factory at the foot of South Street.

Weston’s factory on Fish Island distilled kerosene until it blew up in an explosion in 1861 which led to the death of two employees. It was quickly rebuilt and resumed turning a profit.

In 1865 he was wealthy enough that he purchased the Russell Warren designed William R. Rodman Mansion, built in 1833 for $25,000. He remained there until his death on May 24, 1887. Abraham and his wife Mehitable are both interned in the Rural Cemetery at the Abraham Howland Family Plot.

In many ways, Howland wasn’t only the first mayor, but the first real business mogul. Certainly there were some major business figures in the city’s history before him, but in terms of diversity, progressive and forward thinking, and success he was a massive figure.

At the beginning of this article I mentioned, the sort of domino effect political figures have. When you walk the “cobblestone” or Belgian Sett streets of he historic park, you can look at the faux antique street lamps and remember that you can thank the city’s first mayor Abraham H. Howland for lighting the Whaling City.

When Joe isn't writing, he's coaching people to punch each other in the face. He enjoys ancient cultures, dead and living languages, cooking, benching 999#s, and saving the elderly, babies and puppies from burning buildings. While he enjoys long walks on the beach, he will not be your alarm clock, because he's no ding-a-ling.
Previous Knights of Columbus to host Third Degree Ceremony
Next Craft activity with Ruth and Abby during AHA!