Manny was born in Puerto Rico and grew up as a child there until the age of eleven. His mother unfortunately had come down with a health condition and her best outlook had her moving to the United States with a family member until she got better. Manny was eleven years old and spoke no English. He would follow his mother to the United States, moving with his sisters, arriving in New Bedford in June 2004. 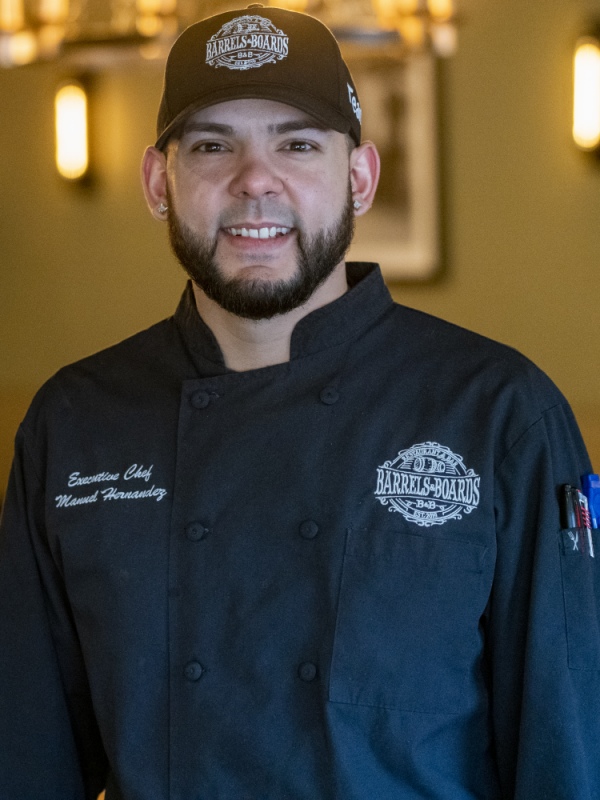 Manny attended school in New Bedford and got his first job when he was 16 as a dishwasher at Nephews in Freetown. After working hard, Ron saw his work ethic and desire to learn and gave him a shot as a line cook where he’d stay for another year and a half.

Manny’s next job would be under Chef Kevin Gibbons at UMass Dartmouth. During the first year, Chef Gibbons observed Manny working with him and told him he could see his potential for being an excellent cook and that could go far if he got serious about learning. With a passion for the kitchen, he seized this opportunity, learning everything he could.

He took on the new role as head chef and ran with it, his continued success found him an opportunity to open a new restaurant with his own designed menu, at a new place being opened called the Charred Oak Tavern where he spent 2 1/2 years making it a huge success. This got him noticed again, and he was approached with an opportunity that he couldn’t pass on opening yet another new restaurant called Barrels & Boards.

Manny continued on his path to success at the new restaurant, working hard as he always had, showing he was invaluable. This time, the new opportunity was to become a business partner at Barrels & Boards. His passion and dedication in the kitchen have continuously paid off and now his future also includes building a brand to a point where it can continue to expand.

Manny acknowledges the hard work he put in with different jobs and under different chefs has really helped his career get to where it’s at today, but more so his strength comes from his family who supports him and has made the long hours work, and the people who work with him in the kitchen. At least a dozen staff members put their faith and careers in his hands and have followed him from one kitchen to another because they see his dedication to not only doing a good job but making sure they’re learning and on a successful path to make a similar journey that he’s had.