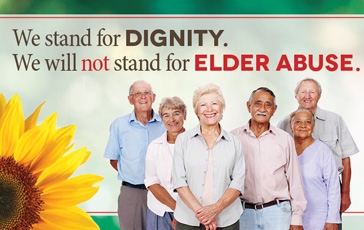 In an effort to reduce crime against senior citizens through education and information, speakers will take to the podium in the cafeteria at Bristol Community College in Fall River to both commemorate World Elder Abuse Awareness Day and also provide seniors and those who care for/work with seniors the knowledge they need to prevent crimes like financial exploitation, abuse and neglect.

“I am very proud that our office is sponsoring such an important educational event. Protecting Bristol County’s most vulnerable populations is one of the cornerstones of my administration. By partnering with agencies like Bristol Elder Services and Senior Whole Health, it is my hope that we can prevent the various crimes committed against the elderly population. This can be achieved through better educational initiatives, teamwork and aggressive targeted prosecutions of those who prey on seniors,” said District Attorney Tom Quinn. “I am grateful to our partners for helping to put together this elder abuse prevention conference. I look forward to partnering with these and many other agencies in the future to help further the goal of reducing crime against senior citizens.”

The conference will begin at 8:30 with a free breakfast. Speakers from the District Attorney’s Office, Senior Whole Health and Bristol Elder Services offer welcoming remarks and information at 9:30.

Then at 10 a.m., Diane Lopes Flaherty of Attorney General Maura Healy’s office will then offer an hour-long presentation on preventing financial fraud and abuse. Flaherty has been with Massachusetts Attorney General’s Office since 2001 as Consumer Mediator/Outreach Coordinator for the Southeastern Mass. Division. She received the Robert H. Quinn Award for Excellence for her efforts in that office.

Prior to joining the Attorney General’s Office, she was appointed by former Mayor Raymond Flynn to lead Boston’s Commission on Affairs of the Elderly. Reappointed by the late Mayor Thomas Menino, she served as Commissioner for a record 11 years, during which time she received wide recognition for her tireless advocacy.

The keynote speaker for the day’s conference will be John Sofis Scheft, who has been providing specialized legal training in the area of elder abuse prevention, investigation, and prosecution since 1993, when he was appointed the Director of Attorney General Scott Harshbarger’s Elderly Protection Project. The Project provided multi-disciplinary training to police officers and protective service workers on a variety of issues affecting the elderly.

Scheft left the Attorney General’s Office at the end of 1995 to start his own police training and consulting firm, Law Enforcement Dimensions.

Scheft has presented extensive training in financial exploitation investigation for the Executive Office of Elder Affairs in Massachusetts from 2001 to 2009. The goal was to create a consistent and effective statewide approach to these cases at the reporting and investigative level.

In the area of elder issues, Scheft’s works include:

· Handbook for the Investigation of Elder Financial Exploitation, Editions in 2001, 2002 and 2007 (with the Executive Office of Elder Affairs)
· The Bank Reporting Project (with Executive Office of Elder Affairs and the Massachusetts Banker’s Association), 1994 (materials have been distributed nationally)
· Law Enforcement, Alzheimer’s Disease and the Lost Elder (with the Massachusetts Alzheimer’s Association), 1994 (accompanied by a videotape, which won a national award; materials have been distributed nationally)
· Elder Issues for the Massachusetts Police Officer, 1993
· The Elder Volunteer and Policing (with AARP), 1994

In addition to the speaking program, nearly two dozen organizations and agencies will be on hand at various resource tables to provide important information to seniors and free giveaways. Some of those organizations who will be staffing resource tables include 4C SouthCoast, Alzheimer’s Association, Massachusetts and New Hampshire Chapter, Coastline Money Management Program, EldersFirst (Diocesan Health Facilities Office), Highland Adult Day Care, Taunton Silver Alert Program, and many more.

The media is invited and encouraged to attend.

“Senior Whole Health is proud to be part of this partnership with the Bristol County DA’s office and Bristol Elder Services,” said Senior Whole Health president, Keith Peifer. “ We want our elders safe in their communities, and we hope they will join us at this event and learn how to protect themselves from issues around fraud and abuse”