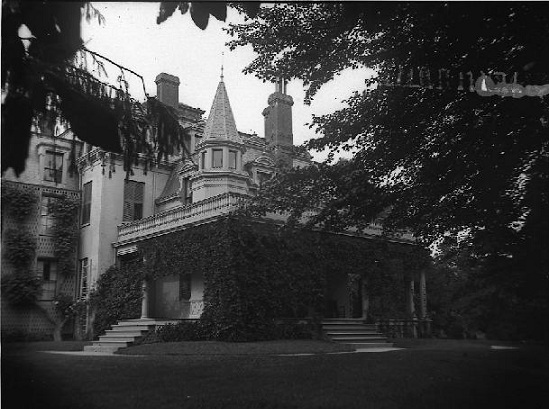 Welcome to the third installment of the series “Historical Personages of New Bedford.” The first being pharmacist Robert H. Carter III and the second being photographer James E. Reed. My intention with this series is to shine some light on the lesser known names and figures of New Bedford’s past. I won’t focus on the more popular and well-known figures since they have not only been covered in substantial depth, but information about these figures is something most people already have a cursory knowledge of. Though redundant to say, if any more information is desired, it is readily available and easily accessible.

The third personage is housewright, builder, carpenter, and businessman Dudley Davenport. Mr. Davenport was born sometime around 1790 right here in New Bedford, when it was a village and city directories have him registered as late as 1908. If these records are accurate, he was a centenarian. He kept a residence at 2 Bush St. at the corner of South Water Street. Bush street is called Madison Street today. This shop was 3 stories high and had a tower and clock.

For most of his life, he was a prominent, wealthy individual responsible for building and relocating many churches, banks, and homes in New Bedford. He was described as being a showy and energetic man, but often erratic. His story is not altogether uncommon for the most part. Like many business moguls of the time, they had a very diverse approach to their business as a way to insure success. If the market slowed or collapsed in one industry, the others would keep you afloat.

In this manner he not only offered the aforementioned services as a housewright (shop at 74 South Water Street), builder, and carpenter, but he was part owner of a number of whaling vessels, served as a director to the Mechanic’s Bank, steam planing mill, grocery store (at 76 South Water Street) and lumber yard (at the foot of Bush Street). At the centennial celebration in 1876, he is referred to as having the title “Esquire” suggesting that he also practiced law, but this is the only mention on historical record connecting him to law practice in any way.

In this way Davenport, was like many prominent and powerful businessmen in the city. Where his distinction begins is his near total ruin, not once, but twice. Two fires nearly two decades apart destroyed his livelihood. We’ll discuss both these fires within his timeline. It is difficult to see how exactly Dudley got his start. Likely he begun as a carpenter, and ran his lumber yard and made a name for himself. As he developed capital, he operated side businesses like the grocery store. On August 27, 1815 Davenport married Betsy “Betty” Booth and the had a son, Dudley Jr. Life was going swimmingly for Davenport. He was a successful businessman, married, and rising in prominence.

In 1821, Davenport built the James Arnold House (his second) at 427 County Street, now known as the Wamsutta Club. He relocated the large brick Abraham Russell house at the head of Union Street a distance of 400 feet with furniture intact, resulting in zero damage. The move was supposedly so perfect, that the clock, which contained a swinging pendulum, kept perfect time. He was contracting jobs to build the woodwork interiors of many of the brick mill buildings being erected.

Fire was a major concern for all citizens in any city, let alone one that was burgeoning as quickly as New Bedford was. It was certainly a primary concern for any businessman, where one fire overnight could wipe out his revenue makers. This was an obvious worry of Davenport’s as he contributed to the purchase of a suction-engine – cutting edge technology of the day- called “the Cataract no.6” from Philadelphia. This made extinguishing a fire much easier to do and could be done much quicker. The Cataract, which was renamed the Mechanic when it arrived, was the only suction-engine in the city. It was likely dubbed this due to the financial connections Davenport had to the Mechanic’s Bank. He was also a member of the Board of Fire-Wards during the years 1822-1830.

Davenport’s apparent fear and concern about losing his businesses were shown to be realistic, and not that of a worry-wart. July 25, 1830 was the date of New Bedford’s “Second Great Fire” which destroyed a substantial part of the city. It can be said that this was Davenport’s “First Great Fire.” This fire originated at William H. Allen’s house, which was on the southeast corner of School and 7th streets. The weather on this Sunday was said to be amidst a spell of very dry conditions, but this day had strong winds.

When the fire begun it spread rapidly and was unintentionally allowed to progress. Being a Sunday, much of the town was at worship. In that era, there was a fire department, but citizens always were integral to putting out fires. We had a “perfect storm” of sorts. Dry conditions, strong winds, and few people around to assist in the extinguishing efforts. It was said that these strong winds were responsible for blowing cinders up to 3/4 of a mile away. Davenport’s rather large carpentry shop -and Jethro Coffin’s boat building shop – were said to have “burned to the ground with the rapidity of magic.” A total of 5 hours of continued effort from the fire department and rallied citizens was needed to finally put this fire to rest.

Not to be deterred, maintaining a mindset that made him successful in the first place, and having other businesses to fall back on, Davenport continued onward and upward. He kept his chin up and renewed his business efforts. His name as a housewright, contractor, and builder was a strong one. He was contracted along with his “rival” builder Robert Chase to build the Double Bank Building. Each was responsible for one half of the bank, which was designed by Russell Warren. Robert Chase was responsible for Mechanic Bank, which was the northern half and Davenport was responsible for the Merchant bank’s southern half in spite of the fact that he was a director for the Mechanic’s Bank. While both builders followed specifications, they differed in the “swell” of the ionic columns. If you look at the corner columns in each group of four, you can see the difference today. Ultimately, Russell Warren sided with Robert Chase when it came to the judging of who was correct.

He built a church on the corner of School and Pleasant (Fifth) streets in 1835 for Reverend Hosea Ballou. Rev. Ballou held the first Universalist sermon right in Davenport’s carpentry shop, which was the future site of the Trinitarian Church. By the summer of 1831, he was prominent and wealthy enough to be added to the list of directors of the Mechanic’s National Bank. By 1836, he was actually an active member of the fire department’s hook and ladder company.

Things seemed back to normal for Davenport, and he was back on track. The next tragedy to strike his life was the passing of his wife nee Betsy Booth on December 17, 1838. By 1843, Dudley’s businesses floundered. Whether this was due to the mourning of the passing of his wife, economic woes of the time or both is unclear. It was only temporary though, as with his previous tragedies, Davenport invested all his time and energy into his business projects. Perhaps, his solution was to be as busy and distracted as possible. In 1846, he was one of the builders contracted to build the interior of the Wamsutta Mills which was a financial boon. He went on to build the house of William. H. Sherman, on the northeast corner of Fourth and School Streets. The North Christian Church, the largest place of worship in Bristol County was erected in 30 days by 20 men under the direction of Dudley.

On March 3rd, 1846 he had insured his properties with the New England Fire Insurance Company for a 3 year term at $2,500.00. This is an important tidbit that comes into play later. Almost 2 decades later, on May 18, 1848 Davenport would have deja vu. One of the fiercest fires the city had ever seen swept through and consumed most of his business properties. This fire started around 10:00 p.m. and consumed his steam planing mill, grocery store and lumber yard. Other casualties of this major fire were William Rotch’s house, Tilson B. Denham’s barn, most of Abraham Barker’s oil which he kept stored in Davenport’s shop. What was saved was due to the “…spirited and hearty exertions of the firemen and citizens.” To demonstrate how united the citizens were when a fire erupted, it was said that “Ladies were actually seen passing water and furnishing refreshments to the exhausted firemen.” This battle also took 5 hours, even with the suction-engine “the Mechanic” and citizens to assist.

After the fire, the New England Fire Insurance Company fought to reimburse Davenport. They felt that he was dishonest about his financial status, and that he was far behind on mortgages and even had liens on some of his properties. He had not stated these issues on his application. Records show that he did have 2 mortgages that were past due. I couldn’t confirm the liens. After this fire, it seems Davenport had his fill and no longer thought of expansion of his business ventures. While he still maintained a number of them, his mind was not on building his “empire”, but on modesty.

He kept a provisions business, the grocery store, and a few other small businesses. Not much more is heard from him in city directories or historical records until 1898 when he is listed as living at 254 Arnold Street.

He is also mentioned as selling is Provisions business to a J.B. Tasker in 1902. His son Dudley, jr. operated a grocery store at 148 Arnold Street, a few blocks from their residence. The last record for both Dudley’s is the city directory listing them as living at 254 Arnold Street. From 1909 on, they disappear from all records. This area containing his home and stores was eventually demolished for the Route 18 highway expansion project.

Dudley Davenport’s role in the city’s history was a pivotal one. He brought a financial boon to the city in terms of jobs, and taxes. He was born, lived and probably died in New Bedford and spent all his money here in New Bedford. His fingerprints are left behind in the gross – the Arnold House, Wamsutta Mills, Double Bank Building, churches- and the subtle; Dudley Davenport has placed a number of “bricks” in the foundation that the city’s success was built upon. He played a large role and was a big contributor to bring the city to where it is today. In an indirect way, Davenport has given back to New Bedford and his life reflected the spirit of its denizens: persistent, tough, almost stubborn, and who will ultimately persevere and triumph in the face of hardship.

When Joe isn't writing, he's coaching people to punch each other in the face. He enjoys ancient cultures, dead and living languages, cooking, benching 999#s, and saving the elderly, babies and puppies from burning buildings. While he enjoys long walks on the beach, he will not be your alarm clock, because he's no ding-a-ling.
Previous Volunteers Surprise Family With Newly Renovated Home!
Next New Bedford’s Forgotten Theaters: Introduction and Allen’s Theater