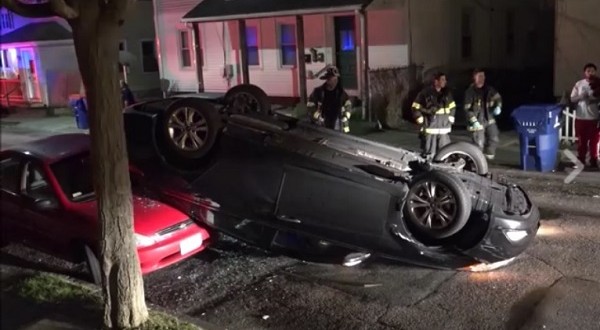 Driving in New Bedford in 2016 – it’s quite the adventure

I joke with friends that my blood pressure goes up 20 points after driving just five minutes in New Bedford. Drivers tend to always be on their phone, tailgate, cut you off, run through red lights, distracted with their phone and now the latest … drivers overdosing on heroin behind the wheel.

Three people overdosed behind the wheel while driving this week in New Bedford.

First, a 26-year old New Bedford man overdosed on heroin while driving on Hathaway Street and struck a parked car around 7am Tuesday morning.

About 12 hours later, a 48-year old New Bedford man overdosed while driving near the intersection of Hazard Street and Purchase Street.

According to the Standard Times, the third overdose “occurred shortly before 11 a.m. at the exit from the Kings Plaza shopping center onto Kings Highway in the city’s North End. The driver was behind the wheel and in the middle of the exit when he overdosed.”

Fortunately, Narcan was used to save them, unless the drivers get treatment we can expect them the repeat the dangerous habit of getting behind the wheel high. In my Narcan Butterfly Effect article, I discussed the effect on society when we keep using Narcan to save overdose victims, but don’t require them to seek treatment.

It’s not just overdosing drivers that create headlines. Also, this week a New Bedford fire truck and New Bedford police vehicle were involved in accidents due to other drivers blasting through red lights.

On Thursday night, a female driver hit a parked car on Chancery Street in New Bedford and flipped the vehicle onto another parked car just after 11pm.

While there are bad drivers everywhere, it seems to be more of an adventure driving through the streets of New Bedford. I’m a firm believer that vehicles in America are more dangerous than guns and this trend will only increase as more and more addicts, addicted to drugs and smart phones, get behind the wheel.