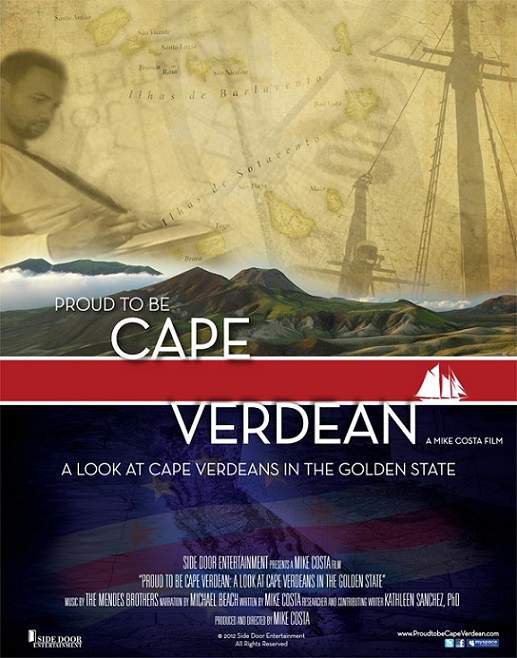 Proud to be Cape Verdean (PTBCV): A Look at Cape Verdeans in the Golden State, a documentary about the Cape Verdean community in California, will screen on Friday, June 28 at 7:00 pm at the New Bedford Whaling National Historical Park theater, 33 William Street, downtown New Bedford, MA. The event is free and open to the public. PTBCV captures the essence of the Cape Verdean culture in California through an insightful look at individuals and organizations and their desire to maintain their cultural identity. The music of the Mendes Brothers, John and Ramiro, is featured. Actor/producer Michael Beach lends his voice talents as narrator.

The writer/producer/director of the film, Mike Costa, will be introducing the film. Costa has been a professional writer for over 15 years and is a member of the Writer’s Guild of America. His many credits include: Roseanne, The Steve Harvey Show, In the House and The Gregory Hines Show. His interest and experience in documentary film making resulted in collaborative works with other Cape Verdean film makers.

This one-hour documentary offers oral histories in conjunction with interviews, photographs and re-enactments that accurately depict the transition of small family gatherings where Cape Verdeans shared their love of their cuisine and music grew, inspired and eventually shaped the formation of non-profit Cape Verdean organizations dedicated to sustaining the legacy of their racially and linguistically rich culture while maintaining a strong connection to their East Coast ties and their home country of Cape Verde. Experts such as Gina Sanchez-Gibau, PhD, Associate Dean of Student Affairs at Indiana University/IUPUI, James Lopes, noted Cape Verdean Genealogist and Cape Verdean Ambassador to the United States, Fatima Veiga are featured.

―The story of the Cape Verdean Diaspora is just as much a part of our own local history as the Golden State’s – we’re all connected, said national park Superintendent Jen Nersesian. ―We’re proud to host this screening and welcome the community into this exploration of Cape Verdean identity and culture.

This has been a collaborative effort of the entire California Cape Verdean community. The film will screen in Massachusetts, Rhode Island, Connecticut, Atlanta, Ohio, California and throughout the Cape Verdean Diaspora. The documentary features Portuguese and French subtitles.

New Bedford Whaling National Historical Park was established by Congress in 1996 to help preserve and interpret America’s nineteenth century whaling industry. The park, which encompasses a 13-block National Historic Landmark District, is the only National Park Service area addressing the history of the whaling industry and its influence on the economic, social, and environmental history of the United States. The National Park visitor center is located at 33 William Street in downtown New Bedford. It is open seven days a week, from 9 AM-5 PM, and offers information, exhibits, and a free orientation movie every hour on the hour from 10 AM-4 PM. The visitor center is wheelchair-accessible, and is free of charge. For more information, call the visitor center at 508-996-4095, go to www.nps.gov, or visit the park’s Facebook page at http://www.facebook.com/NBWNHP.