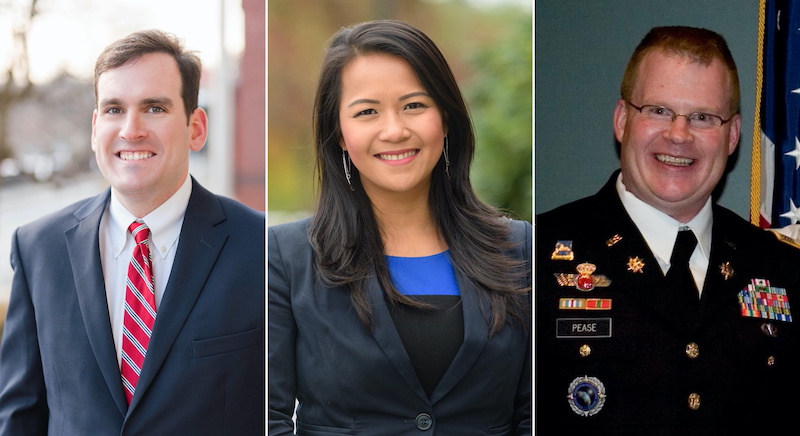 Votes were still being counted in many municipalities across Massachusetts late Tuesday night, but preliminary results indicated the balance of power in the state Legislature will be changed only slightly, in large part because only one-quarter of the 200 seats up for grabs every two years drew contested races.

Democrats picked up a Senate seat, but several House races were too close to call late in the night, muddying the outlook on whether either party will net a gain in that branch.

The headlining victory for the Democrats on Tuesday could be Lunenburg Democrat John Cronin’s toppling of incumbent Republican Sen. Dean Tran in northern central Massachusetts.

Party officials said Cronin was on track to win, Cronin retweeted a post that congratulated him, and the Sentinel & Enterprise reported late Tuesday that Cronin’s lead was about 570 votes with 95 percent of ballots counted. Democrats held the seat from 1993 until Tran won it in a 2017 special election.

With Tran’s defeat, the GOP caucus in the 40-seat Senate is poised to shrink to three members. That level of representation is the fewest seats the party has won in a biennial general election since at least 1970, though the minority caucus dropped to three as recently as 2013 due to a mid-session resignation.

The GOP did flip a Westfield-based House seat last held by a Democrat and defended a handful of incumbents in contested contests.

Kelly Pease, a retired Army Officer who worked as a legislative aide for former Republican Sen. Donald Humason, topped the ballot in the Fourth Hampden District by about 9 percentage points. The seat, representing the roughly 41,000 residents of Westfield, has been vacant since Rep. John Velis resigned in May to join the Senate.

Pease’s victory completes a round of political musical chairs. Humason left mid-term to become Westfield’s mayor, Velis — who in 2014 became the first Democrat to hold the Fourth Hampden District in more than three decades — flipped Humason’s Senate seat blue, and then Republicans took back the House seat Tuesday.

“The biggest thing is I’m humbled by the people of Westfield who selected me as their representative,” Pease said on Election Night, according to a Springfield Republican report. “Whether you are a Republican or a Democrat or independent I’m here to represent all of you.”

Sen. Patrick O’Connor of Weymouth, one of the three other Republican senators, was leading Meg Wheeler of Cohasset in his bid for a fourth term, though votes were still being counted in that district that winds along the South Shore.

Rep. Tram Nguyen, a North Andover Democrat, won election to a second term, fending off a challenge from Republican candidate Jeff Dufour two years after she unseated Rep. Jim Lyons. After he left office, Lyons took over as chair of the Massachusetts Republican Party.

Democratic House Speaker Robert DeLeo said Tuesday afternoon that he had been keeping an eye on the races involving Reps. Nguyen, Kathy LaNatra of Kingston, Josh Cutler of Duxbury, and Dave Robertson of Tewksbury.

“So far, what we’ve been hearing has been good,” DeLeo told the News Service at the State House late Tuesday afternoon. “We also feel pretty good, with all due respect, because of the fact of Trump heading up the ticket, the Republican ticket nationally. We feel, at least here in Massachusetts, that will help Democrats.”

In addition to Nguyen, Robertson was victorious Tuesday, defeating Republican Alec DiFruscia by more than 3,000 votes, while Cutler won by about 4,800 votes, according to the Associated Press. LaNatra said late Tuesday that she was leading by about 2,500 votes with results from two towns outstanding, and her opponent, Summer Schmaling, said she was expecting a tight race with results to come Wednesday.

On Cape Cod, Democrats reclaimed the 2nd Barnstable District seat that Republican Rep. William Crocker has held for the last four years. Democrat Kip Diggs won by about 2,000 votes there, according to former Rep. Brian Mannal

Mannal, the last Democrat to hold that House seat, said on Twitter that he was the first person to tell Diggs that he had won. According to the Cape Cod Times, Diggs held the North American Boxing Federation and International Boxing Organization world welterweight title in the mid-1990s.

Republicans held another Cape seat with Steve Xiarhos’s victory in the 5th Barnstable District, where current Rep. Randy Hunt is not seeking reelection. Xiarhos, a Barnstable resident, claimed victory around 10 p.m. with a lead of more than 1,200 votes over Democrat Jim Dever of Sandwich.

“For over a year, we’ve been working together, every one of you, doing our standout and knocking on doors, and you know what? We did it,” Xiarhos told supporters in a Facebook Live video.

Twenty-three years after she was succeeded by Rep. Theodore Speliotis, former Rep. Sally Kerans is headed back to the House to succeed him. Kerans, a Democrat, topped the five-way race for the 13th Essex District that she represented for three terms in the 1990s.

Democrat Meg Kilcoyne of Northborough, who has worked as outgoing Rep. Harold Naughton’s legislative director for the past 10 years, won the race to succeed him, topping Lancaster Republican Susan Smiley, who previously worked in the Executive Office of Energy and Environmental Affairs.

Xiarhos, Pease, Kerans and Kilcoyne will join four other newcomers on Beacon Hill after winning elections for open seats.

The final contested general election for an open seat pitted two North Attleborough town councilors, Democrat Adam Scanlon and Republican John Simmons, against one another. Clear results for that race were not available by midnight.

For a second campaign cycle in a row, GOP Rep. Lenny Mirra of West Newbury fended off a challenge from Democrat Christina Eckert. Eckert’s camp conceded the race late Tuesday and a Democratic source said the contest had been a close one.

In seven other districts where sitting lawmakers are departing, no Republican or independent candidate made the ballot, leaving the Democratic nominee as the presumptive winner after the Sept. 1 primary election.

Brandy Fluker Oakley and Rob Consalvo prevailed in Democratic contests for a pair of Boston seats being vacated by Reps. Dan Cullinane and Angelo Scaccia, respectively. Fluker Oakley has worked as a public defender and public school teacher, and Consalvo served on the Boston City Council before going to work for the Walsh administration.

Patricia Duffy, a former publishing worker, labor leader and aide to the outgoing Rep. Aaron Vega, emerged from a three-way primary in Holyoke for the seat Vega is leaving, and retiring Rep. Lou Kafka’s staff director, Ted Philips, of Sharon, won the primary and is poised to assume his boss’s seat in the House.

In Watertown, transportation consultant Steven Owens is poised to take over for the outgoing Rep. Jonathan Hect in the House, and City Councilor Jessica Giannino of Revere is set to claim the seat now held by the outgoing Rep. RoseLee Vincent.

Retiring Rep. Denise Provost’s Somerville seat is on track to be filled by Erika Uyterhoeven, who describes herself as an antitrust economist and a Democratic Socialist. Uyterhoeven is a founder of the Act on Mass organization that has pushed progressive causes on Beacon Hill and criticized House leadership over transparency issues.

Democrats have wielded super-majorities in both chambers for nearly three decades, margins large enough to ensure they could override any gubernatorial veto, which they generally have done over the years.

The last time Republicans held at least a third of either branch, enough to block a veto override, was in the 1991-1992 session in the Senate.

Two years ago, Democrats nabbed three seats from Republicans to expand their supermajorities, and they padded their margins even further during mid-session special elections.

Five seats in the Legislature opened up partway through the two-year term when lawmakers departed for other opportunities, and Democrats swept each of the races, flipping one House district and two Senate districts previously held by the GOP.

Coming into Election Day, the Democrats’ 36-4 grip on Massachusetts Senate seats made it the second-most lopsided state Senate in the country, tied with Wyoming, according to the National Conference of State Legislatures. Only Hawaii, where Democrats controlled 24 of 25 Senate seats as of April, or 96 percent, has a more uneven party split among its Senate.

In Massachusetts and Wyoming, one party controls 90 percent of state Senate seats. In Massachusetts, Democrats hold 36 seats to the Republican Party’s four seats, but in Wyoming, the partisanship is reversed and the GOP controls 27 of 30 filled seats, according to the NCSL.

The Massachusetts House is less lopsided than the Senate but still ranks as having the seventh most uneven political party distribution of any state House of Representatives in the country, according to NCSL. Bay State Democrats hold 127 of the chamber’s 160 seats, or 79.4 percent.

As of Aug. 1, there were 7,383 total state legislative seats in America, according to NCSL. If every legislative chamber were combined into one nationwide Legislature, Republicans would be in the majority with control of almost 52 percent of the seats. The balance of power would be 3,820 Republicans, 3,436 Democrats, and 127 independents, other party or vacant seats.