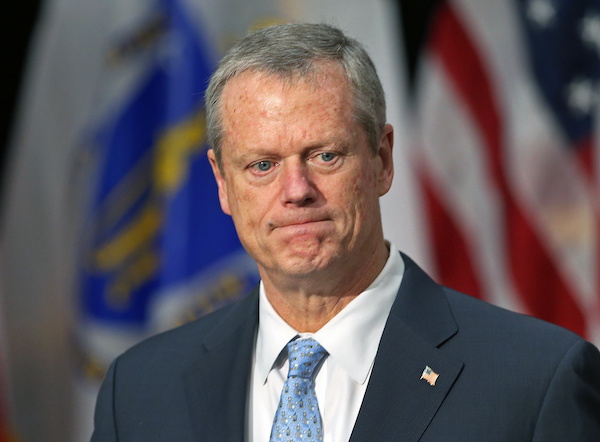 Boston MA: 6-1-20: Massachusetts Governor Charlie Baker held his daily press conference in Gardner Auditorium at the Massachusetts State House, where he made a statement and responded to reporter's questions about the riots in Boston on Sunday night. (Jim Davis/Globe Staff)

The state’s death toll from COVID-19 surpassed 8,000 on Friday, with the report of 50 new fatalities. Thirty-nine of those deaths were among patients with test-confirmed cases of COVID-19, while the other 11 were from probable cases, which the Department of Public Health defines as someone with a positive antibody test who either had COVID-like symptoms or experienced likely exposure to the respiratory disease.

Of the 8,013 people in Massachusetts whose deaths are attributed to COVID-19, the bulk — 4,996 people — were aged 80 and older. Sixty-three percent of the deaths, or 5,051, were reported in long-term care facilities.

The seven-day weighted average of the positive molecular test has been below 2 percent since June 20, according to the Department of Public Health, but ticked up slightly on June 25, to 1.9 percent from 1.8 percent the previous two days. The number of people hospitalized with COVID-19 dropped by 31 in Friday’s report, to 791, with 156 patients in intensive care units and 99 intubated. Two of the state’s hospitals were using their surge capacity, down from four the previous day.