At 1:18 PM Thursday Trooper Nicholas Latino, assigned to the State Police-Sturbridge Barracks, attempted to stop a dark blue 2015 Honda Accord with a North Carolina registration for speeding on Route 84 eastbound in Sturbridge. The driver refused to stop and fled at excessive speeds while weaving in and out of traffic, at times driving up to approximately 130 mph, as well as up to 80 mph in a construction zone.

Trooper Latino observed the Accord take Exit 3A onto Route 20 eastbound. State Police advised police in surrounding towns to be on the lookout for the vehicle. Shortly before 1:30 PM, Charlton Police located the vehicle and attempted to conduct a stop. The driver again refused to stop and continued to flee until crashing on Route 20 at H. Putnam Road. 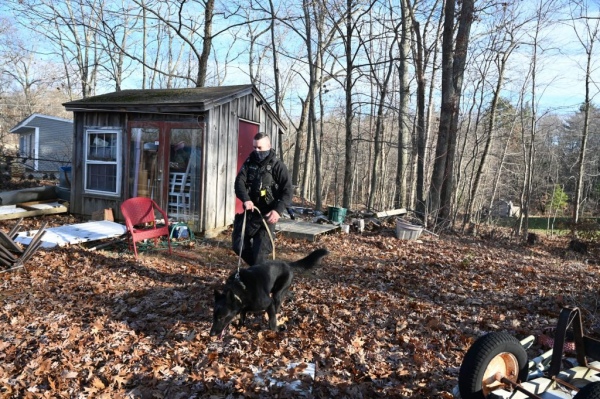 Trooper D’Angelo and Kody search the yard where one of the suspects discarded cocaine while trying to flee. Massachusetts State Police photo.

Both occupants of the vehicle, the male driver and female passenger, both from New York City, fled on foot but were quickly apprehended by Charlton Police officers and Troopers Latino, Amy Waterman, Robert Fagundes, and Michael Baroni.

Trooper Kurt D’Angelo from the State Police K-9 Unit and his partner Kody responded to assist. Trooper D’Angelo deployed Kody on a search for evidence along the route that the suspects’ ran after the crash. While working through a backyard, Kody pulled toward a shed and exhibited a change in behavior, sticking his nose through a large piece of rolled up garden edging and into a pile of leaves. He displayed an alert consistent with his training for the detection of narcotics.

Trooper D’Angelo and Trooper Latino looked down into the area where Kody alerted and recovered a large cylindrical package wrapped in tape inside a condom. The package, which was recovered at the location where the female suspect had been apprehended, contained a substance believed to be cocaine. The total weight of the suspected cocaine was approximately 80 grams.

The driver, BLAIR THORNTON, 25, of New York City, was charged with the following offenses:

The passenger, SHANTIA CROCKER-CARTER, 23, of New York City, was charged with trafficking in cocaine and disturbing the peace. Investigation revealed that she was in possession of the cocaine while in the vehicle and that it was intended for delivery from a source in New York City to a person in central Massachusetts.

THORNTON suffered minor injuries when he crashed the Accord and was transported to Harrington Hospital for treatment under police guard. Upon his release he was transported to the Sturbridge Barracks, where he and CROCKER-CARTER were both booked. A bail clerk ordered each suspect held on $10,040 cash bail. They were expected to be arraigned in Dudley District Court. 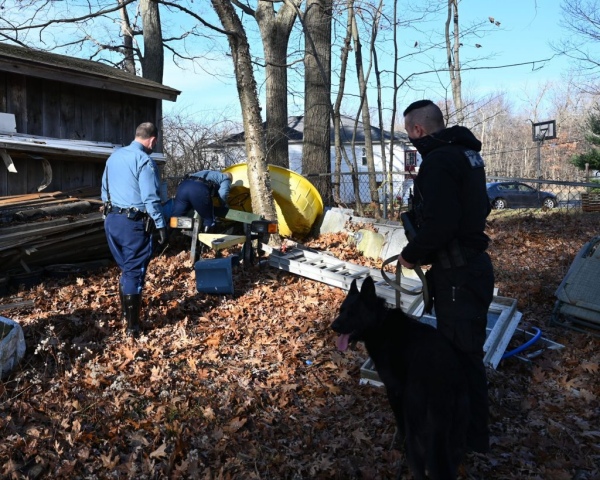 Troopers recover a package containing 80 grams of cocaine while Kody, who just sniffed it out, looks on. Massachusetts State Police photo.
Translate »