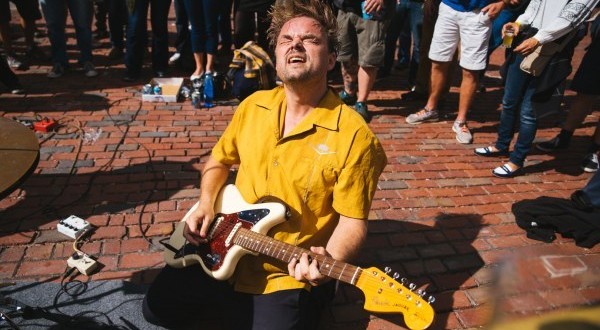 For the first time since its inception in 2010, the Copenhagen Beer Celebration took place stateside this past Friday and Saturday, featuring over 50 breweries from across the world pouring over 100 different beers.

The Boston event offered the opportunity for craft beer lovers from New England and beyond to sample brews that would not be available any other way. It also offered samplings of great food and six bands performing a variety of musical stylings.

Boston was an ideal location for the festival since Massachusetts and New England is seen as a hotbed for microwbreweries and have produced some big names in the craft beer industry, such as Allagash Brewing Company, Trillium Brewing Company and of course, Boston Beer Company, also known as Samuel Adams.

Mikkel Borg Bjergsø, co-founder of Mikkeller Brewing, said the American crowd was just as large as the ones he’s seen in Denmark, but attendees were much more laid back.

“The crowd is different, which is obvious, because in Europe, craft beer drinkers are like beer geeks and here it’s for everybody,” Bjergsø said.

The primary focus of the Boston festival, just like it’s Danish counterpart, is to demonstrate all the great accomplishments throughout the craft beer industry all while having a great time.

“When we started Copenhagen Beer Celebration five years ago we wanted to make a big party for everybody, for the brewers and for the customers,” Bjergsø said. “I want to showcase a bunch of beers that have never been seen before and aren’t easy to find.”

“It’s a really cool collaboration of beer and music that people won’t normally experience,” said Josh Wolf, New England Sales Manager for Allagash Brewing Company. “It’s exposure for these breweries but it’s also exposure to beer that folks will never get their hands on.”

Many brewers in attendance came prepared with specially made beers just for the festival.

“It’s also sort of like a competition now. You cannot just bring your normal stuff because the guy next to you will be doing something special.”

Bjergsø went on to explain European craft beer is still in its early stages of popularity but working toward its peak.

“It’s such a different market in Europe,” Bjergsø said. “Craft beer is something everybody drinks here. It’s a part of a lot people’s lives and it’s not like that in Europe.”

“In Europe we are 20 years behind. I think that in Europe it will be very big soon. If we do just half of what has been done here it will be huge.”

Swedish brewer Olly Bartlett from Stockholm Brewing Company agrees that Europe is just on the cusp of seeing a craft beer boom.

“It’s embryonic,” Bartlett said of the craft beer movement in Europe. “IPA is new and becoming the new lager, though it still has a long way to go.”

Bjergsø said he hopes to be back in Boston next fall to do it all over again. By the looks of the thousands of eager crowd-goers, that shouldn’t be a problem.