Home / Latest / Laughing it All Off; Comedian Colin Quinn on his upcoming show, The New York Story at the “Z,” on October 10 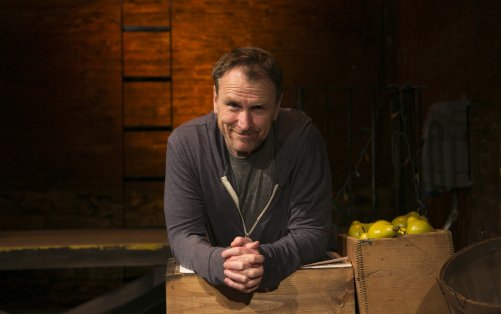 Laughing it All Off; Comedian Colin Quinn on his upcoming show, The New York Story at the “Z,” on October 10

Colin Quinn of SNL, Grown Ups, and Trainwreck fame comes to New Bedford’s Zeiterion Theater this Saturday, October 10th. As part of the 2015 “Stories Untold” series, he brings a riff off of his critically acclaimed “The New York Story”, a one-man show directed by Jerry Seinfeld.

Between working on new material and touring the Northeast corridor, Quinn took the time to chat with me about what we can expect from the show, what we shouldn’t expect for the future of human nature, and how to laugh it all off.

“It’s sort of about New York, but its become something else now,” the one-man show focuses on the history of the north east and all of the ethnic groups at play. “New Bedford is a pretty interesting city, you’ve got the Portuguese and Cape Verdeans,” he hints at some possible material. Switching his act up at every show based on location and what’s in the news, we are sure to expect some hilariously offensive stereotypes that are sure to ring true. Encouraging us to drop the political correctness and embrace the history of those hushed tropes, and recognize “hey, that’s like my brother, that’s like my cousin, that’s just like me.”

On working with comedy legend, Quinn tells me “He let me stay at his house in Long Island and we went over the whole show every day.” Working day and night the two wrapped up their preparations in just seven days. Why do you have to make it sound like bffs? ‘Do you guys do everything together?’ Yes. You make it sound like we have two straws in our milkshake.”

But their dynamic isn’t always sunshine and rainbows. “He would tell me ‘you should cut that’ and I’m like ‘No, why?’ And he’s like ‘well, I’m jerry Seinfeld’. Yeah, but I’m CQ.”

Their back and forth banter seems to have done the trick, the show, his third after “Long Story Short” and “Unconstitutional” comes highly acclaimed across the board.

“Totally Hilarious!” No one is spared from Quinn’s dexterous mixture of mockery and admiration.” –Theatermania

Always working on new material, Quinn takes inspiration from the news, history, and what he calls the “fatality of human nature”. “I’m working on the fact that when you look at the whole world, people get more and more aware, sensitive, compassionate, and things get worse and worse. The most fascinating thing, the comedy of life, is that after all these years on the planet, the exact same problems from the Old Testament, the Code of Hammurabi, our human nature has not changed one bit even though technologically we are a whole different breed of person. But we’re exactly the same, its psychotic.”

Quinn tackles larger-than-life issues by looking at it straight in the face and telling it as it is. “I don’t mean to be depressing, I know it doesn’t sound funny.

It’s just a way of looking at it that’s funny.” Rather than distracting audiences through comedy, he forces them to tackle real life issues and the moments when we have to ask ourselves “what’s the point?” with a sense of humor. “When you hear something fatalistic, but you know it’s so true, we laugh, because it’s the only thing we can do.”

Don’t miss Quinn’s unapologetic installment in the Untold Stories series this Saturday, October 10th at the Zeiterion Theater. Tickets are still available at the box office or zeiterion.org

Previous Grammy-winning, Massachusett’s native Paula Cole to perform at Narrows Center for the Arts on October 10
Next 10 Ghoulishly Creative Halloween Ideas for the Yard or Home