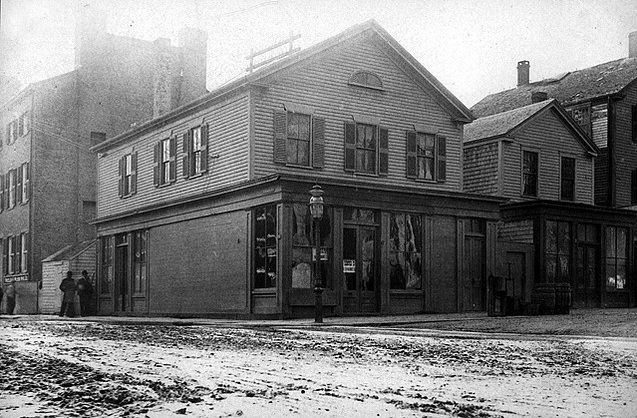 Cobblestones were often mortared or packed into a compacted sand layer. This allowed the stones to shift with pressure and time instead of cracking, making them a sensible alternative to paved roads and easier to maintain from a physical and economic point of view.

Cobblestones were in abundance because of their availability. Ships crossing the Atlantic from the Old World to the New World would use cobblestones as ballast if their hulls weren’t full of commodities. Once they reached port, the cobblestones would be replaced with goods. These excess cobblestones then ironically became a commodity themselves. Also in use were Macadam roads, which was the use of aggregated smaller stones cemented together and layered on native soil. While considered more durable and did away with some of the issues of simple dirt roads, dust was still an issue. Something that didn’t come with the territory with cobbled streets. Also, heavy rains would still damage and affect the macadam roads.

Eventually progress and technology improved to the point that paving with asphalt and/or concrete became far cheaper and easier to do. Obviously, the smoother, cleaner ride with less noise pollution were factors that contributed to the transition to asphalt and concrete. While these types of roads have been around since Babylon, they weren’t economically feasible until the beginning of the 20th century. By the 1920s asphalt roads were far more prevalent.

So on to the aforementioned setts. What are they and why are they used in the historic district here in New Bedford? Setts, also called Belgian Blocks, are rectangular in shape and quarried stone, usually granite. These stones were also in abundance since they were also used as ballast. Unlike cobblestones, they were shaped to fit between the frames on vessels. They are called Belgian blocks, not because the stones were necessarily quarried from Belgium, but because Belgium is where the process of quarrying and cutting them into rectangles originated from. Setts eventually replaced cobblestones because of the flatter, more even surface and less chance of cart’s wheels getting wedged or stuck between cobblestones. Setts could be placed closer together, with less friction for the carts in a smoother, quieter (albeit still noisy), safer ride.

The first street to get the setts was Water Street in 1838. New Bedford’s cobblestones and sett paved roads extended far past the historic district. Though roads paved with setts were gradually covered in asphalt and the sett paved roads shrunk. The advent of the automobile sped this process up to the point we are now. Many a road wears to reveal the setts underneath, before the city repairs it and once again hides the history. All hail progress.

So now that we know these streets are actually paved with Setts and not Cobblestones, should we correct people who use the term Cobblestone? To do so would be snobbish. I’ve heard of beer snobs, wine snobs, and art snobs, but history snobs?! I say let colloquialism win the day. When someone says “I just love your cobblestone streets.” Shake your head in agreement, smile and say “Me too.”

Special thanks to the New Bedford Whaling Museum and Spinner Publications for the use of the photos. Without their generosity these articles would consist of dry text. The info and credit behind the photos in this scroll gallery break down as follows: