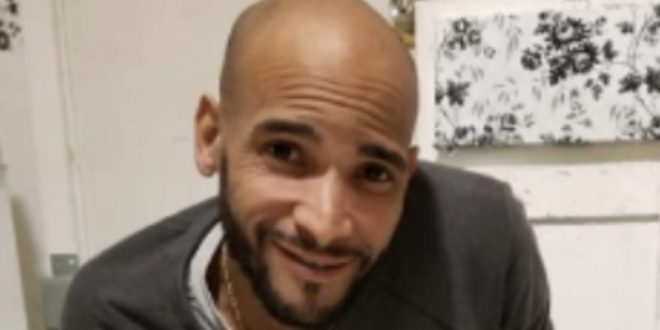 The following was posted to The Coalition for Animals of Greater New Bedford’s Facebook page:

As part of its commitment to the humane treatment of animals, The Coalition for Animals of Greater New Bedford is issuing a $1,000 reward for the apprehension and conviction of a New Bedford man wanted on animal cruelty charges after he was captured on video striking a dog.

Miguel A. Martinez, 42, of 472 Cottage St., New Bedford, is wanted on animal cruelty charges after an online video showed him striking a dog at his Cottage Street residence Oct. 9.

The dog and her puppies were taken from the home by New Bedford Police and transported to Tufts Veterinary Emergency Treatment & Specialties, where tests indicated they were not injured in the attack.

“This kind of treatment of an innocent animal is reprehensible,’’ said Coalition President Lauren Stamatis. “Our Coalition works to protect the animals in our community and we are horrified by this blatant act of violence and abuse.’’

“We are offering this reward from our established Animal Abuse Reward Fund to encourage the public to keep their eyes out for this individual, who needs to be brought to justice in the criminal court system,’’ she said.

Martinez also has pending drug trafficking charges against him.

Anyone with information about the whereabouts of Martinez is asked to call New Bedford Police Department tip line at (508) 961-4584.

The Coalition for Animals of Greater New Bedford is a non-profit composed of dedicated volunteer members and organizations working hard to promote the wellbeing of animals in our community. The Reward Fund is just one of many programs sponsored by the Coalition, all aimed at educating the public about animal-related issues, reducing pet overpopulation, and aiding local homeless animals.

If you are interested in donating to support the Coalition, please use the “Donate” button on their website and note which program (the Reward Fund, Spay and Neuter, etc.) you are seeking to support. For more information, please visit: www.coalitionforanimals.com