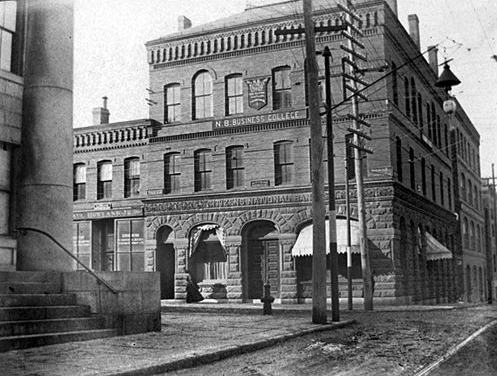 Any early photo showing the building with its original third floor – not the NB Business College sign and attached structure to the West. (Spinner Publications)

The Citizen’s National Bank building is a structure with quite a bit of history. Not the “gasp,” or “What a crazy story!” type of history, but the slow and steady “Hmmm, interesting.” kind of history. While the building was erected in 1877, its story goes back a few years earlier.

The building’s story begins with a partnership between like-minded individuals – Joseph Arthur Beauvais of South Dartmouth and Thomas B. Fuller of Fairhaven. Born in 1824 of French immigrants (his father was conscripted in Napoleon’s army), Mr. Beauvais was a salty veteran of James B. Wood’s counting room – which was the room where the accountants kept their books and records of transactions. It was said that New Bedford was the richest city in the world in 1853, so two decades on you would find that many people were employed in some fashion or other in the whaling industry. Those with a knack for accounting found themselves in a counting room or house somewhere within the city.

After twenty one years in the employ of James B. Wood, Mr. Beauvais wished to strike out on his own and started Beauvais & Company, specializing in private banking or what we would call today “Financial Planning.” His office was on the northeast corner of Water and Centre Streets – what is today the Tatlock Gallery.

His head cashier was a one Thomas B. Fuller (1849-1886) who would eventually become his partner in 1874. I can’t seem to find any record of how a cashier rose to become a partner – perhaps it was his extraordinary skill with numbers, a strong friendship with Beauvias, substantial personal savings or an act of loyalty on Beauvais’ part. Perhaps, I misunderstand the position of head cashier and confuse it with the contemporary term. By all means, if someone is in the know and can shine some light on the matter, please do.

A year later, the Citizen’s National Bank was organized and Beauvais and Fuller combined their assets when their business was transferred to it. What the records do show is that the bank was not welcomed by other banking institutes because of its private banking nature. However, what Beauvais and Fuller did, they did well. In short order, they gained the full support of the community at large.

They enjoyed substantial success enough that they relocated in 1891 to the building we know as Freestones – whose facade still declares “Citizen’s National Bank.” The facade is comprised of Long-Meadow red freestones which is a type of red sandstone that made up part of the bedrock of Longmeadow, Massachusetts – the name which would eventually be adopted for today’s restaurant.

The bank was on a stretch called the Robeson Business Block that included all of the buildings on William St. from Acushnet Ave. to N. Second St. While the bank already owned the building which it built and ran out of in 1877, it was occupied by the Automatic Telephone Company headed by F.T. Akin and L.B. Bates. They had a running ad “We Want to Supply You with Telephone Service. We offer lowest prices. Unlimited Service. Private metallic lines. Long distance phones. Modern construction and guarantee satisfaction. Use the AUTOMATIC toll line when talking to Fall River. CALL LONG DISTANCE.”

Ah….I pine for the days of metallic lines and when a call to Fall River was long distance. Today a call to a martian lander is considered long distance!

Anyhow, the bank printed 9 different denominations to the tune of $1,488,720 dollars worth of national currency, and if you are a collector of sorts you may come across what is left of this $1.4 million dollars on auction sites or dusty cellars.

By 1899 Mechanic’s Bank was a powerhouse in the area and the Citizen’s National Bank was liquidated. Seems like yesteryear differed little from today when it comes to banks. This year it has one name, and the next year it’s someone else. Sticking with this theme, after it was liquidated and merged with the Mechanic’s Bank, lo and behold the New Bedford/Acushnet Cooperative Bank moved on in.

This is where the building’s first of two fires takes place in 1934. This fire destroyed the third floor which was never replaced.

At this point in the building’s history things get a bit hazy. It seems it is easier to find a detailed history of the 19th century than it is to find historical information from the 1940s onward. Most of what is available from this time on is accessed by anecdotes. It’s not that there aren’t documents and images of this era, it’s just that not a lot is available for public access. It’s primarily an oral history.

So while history shows that the building had enough of banks and became a “cafe,” the official documents offer little more. Anthony DiPiro, son of Fay DiPiro who started Fay’s Knotty Pine opened Haskell’s in the mid to late 40s. I’m sure there is someone alive today that recalls this place and more exact dates.

Oral history states that Haskell’s Cafe was a bar/restaurant that was pretty “sketchy.” It had a reputation as a “hard” place. In 1951, a cigarette left unknowingly burning by a patron set the building afire again. The scorch marks can still be seen today on the pillars in the main dining room.

Haskell’s eventually re-opened after licking their wounds, but would eventually rename and become Pequod’s Lounge. I’m unsure if it passed hands or just took on a new name, to breath some new life into the venture. I haven’t heard much about Pequod’s or the typical clientele. My good friend Earl mentioned that his dad told him that it was a Go-Go bar with women dancing in cages hanging from the ceiling. What have you heard?

In 1979 the building would be taking over the fantastic Freestone’s City Grill (their Freestone’s Pasta is one of my favorite dishes on earth) which it is still today. The next time you walk by this iconic New Bedford building you can look at it in a different light – perhaps show up to your guests how knowledgeable you are about the historic district!

When Joe isn't writing, he's coaching people to punch each other in the face. He enjoys ancient cultures, dead and living languages, cooking, benching 999#s, and saving the elderly, babies and puppies from burning buildings. While he enjoys long walks on the beach, he will not be your alarm clock, because he's no ding-a-ling.
Previous New England Patriots Vince Wilfork lends hand at rollover crash
Next Pirates invading historic Fort Rodman in July