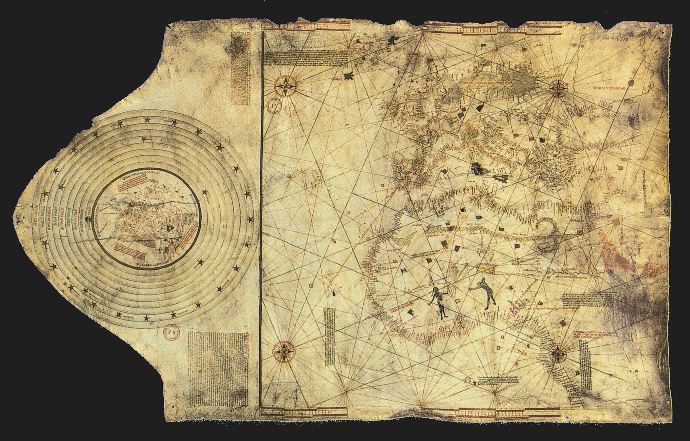 1. While Columbus played a major role in rooting Europe into North and Central America, he was not the first European to discover America. Leif Ericson landed on the northern tip of Newfoundland almost 500 years earlier. Columbus discovered and explored the Bahamas and other Central American areas (graphic of his trips here). His discoveries were not only five centuries later compared to Ericson, but nowhere near the United States of America that we know today.

3. Columbus was actually trying to reach Japan when he landed in the Bahamas.

4. Columbus was rejected three times over seven years (1485 – 1492) before finally getting approval and funds from the Catholic Monarchs Ferdinand and Isabella to make his voyage.

5. Ferdinand and Isabella promised Columbus a large chunk of the profits because they never expected for him to return. The decedents of family sued and levied disputes in court against the crown until 1790.

6. After his first voyage, Columbus was Governor of the Indies, where he did such a bad job and reportedly committed barbaric tortures, that he was arrested and spent 6 weeks in prison. He was freed from prison and took up a his fourth and final voyage to the New World.

7. Against popular belief, Columbus was not the only guy that thought the world was round. Most educated people in Europe understood that the world was not flat. Columbus simply thought the distance to Japan was shorter heading west than east and had no clue there were two continents in the way. It’s as simple as that.

9. The New World did have its revenge on Europe. Many scientists believe that syphilis was introduced to Europe when Columbus’s returned home after his first voyage. Once introduced to Europe and spread through traveling armies at war, syphilis caused as many as 5 million European deaths.

10. At the time of his death, most believed that Christopher Columbus died from Gout, but today some experts believe he died from  a progressively debilitating form of arthritis, a rare tropical disease.

11. After his death, Columbus’s remains were buried in four different locations; Spain, Dominican Republic, Cuba and back to Spain, mostly due to international politics and war.

12. The asteroid “327 Columbia” was discovered by Auguste Charlois 1892 and named in honor of Columbus.

13. There are 14 commissioned sculptures in the United States dedicated to Christopher Columbus.

14. Columbus’s armchair that he used at his chart table along with other artifacts can be seen at the Columbus family chapel in Boalsburg, Pennsylvania.

15. There are no known authentic portraits of Columbus. All portraits seen today were done posthumous.

16. There are at least 19 locations named after Christopher Columbus to include the country of Columbia, British Columbia in Canada and Washington, D.C. (District of Columbia).