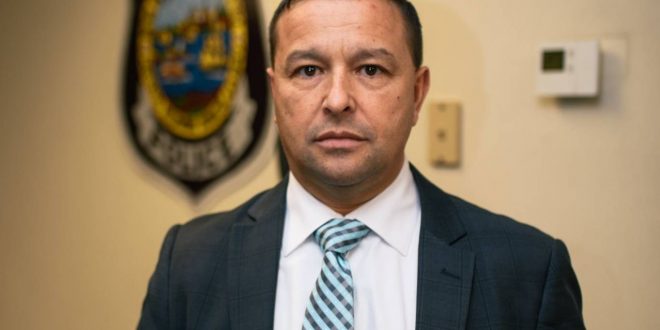 Chief Joseph Cordeiro has announced his retirement from the New Bedford Police Department after serving on the force for 35 years, including for the last five years as Chief of Police. His last day as Chief will be April 23. Deputy Chief Paul J. Oliveira will assume the role of Acting Chief of Police on April 24.

During Cordeiro’s tenure since 2016, violent and property crime in the city has declined significantly. Under his leadership, the department has professionalized operations with a data-driven mission, including the implementation of biweekly data briefings. Significant upgrades to equipment, including ballistic vests, active shooter kits, and new vehicles; technology, including replacement of all department computers and mobile terminal; and facilities, including the Chief’s role in planning the city’s first new police station in more than 50 years, have been made during his tenure.

Chief Cordeiro has organized the department around a community policing philosophy, including walk and talk among the patrol division, and partnerships with the city’s public schools. He has focused on supporting residents of New Bedford’s neighborhoods with problem property teams and relationship-building with neighborhood and landlord organizations. Cordeiro also established the Chief’s Leadership Advisory Committee, comprised of community members and designed to solicit the ideas, input, and collaboration of city residents.

He has spearheaded significant partnerships between the Police Department and community organizations, including pioneering the first law enforcement assisted diversion program in Massachusetts to provide treatment to those suffering from addiction.

Most recently, New Bedford’s stability over the summer of 2020 made it an exception among American cities, bolstered by the community-based policing philosophy that Chief Cordeiro has fostered among the department and city residents. In the past year, New Bedford Police Department also stood out among police departments in other cities in its low rate of officers who have tested positive for COVID-19, after Chief Cordeiro swiftly implemented strong safety protocols for officers at the onset of the pandemic.

Mayor Jon Mitchell appointed Cordeiro to the position of Chief of Police in May 2016. Before serving as Chief, Cordeiro was Division Commander of the department’s Downtown Station, and before that he had served as commander of several units, including Background Investigations, Juvenile, Sexual Assault, Domestic Violence, Organized Crime and Narcotics, Traffic, and Animal Control.

While he has been eligible for retirement for several years, and has discussed retiring with the Mayor last year, Chief Cordeiro was committed to remaining throughout his contract term, which ends tomorrow, to provide stability during the COVID-19 pandemic over the past year.

“I am deeply grateful for Chief Cordeiro’s leadership of the Police Department for the past five years, and for his career in service to the residents of our city,” said Mayor Jon Mitchell. “Under his leadership, New Bedford became a safer city; the decline in both violent and property crimes during his tenure were among the steepest in the country. At the core of his success was his focus on relational policing; he has emphasized that police build legitimacy and reduce crime by fostering strong working relationships with residents and community groups. His concern for the well-being of his fellow residents was plain to see, and it enabled him to command their trust, which is the foundation of effective policing. I appreciate the Chief’s willingness to remain through the end of his contract, so that the department could respond effectively to the pandemic and help keep his officers safe.”

Chief Cordeiro said, “I am grateful to have worked with the amazing men and women of the New Bedford Police Department over the course of my career. I profoundly appreciate the support of our community, without which our many accomplishments over my five-year term as Chief would not have been possible. It has been my great privilege over the past 35 years to serve the people of the city I love, and I am proud to have ended my career with the department as the first Portuguese immigrant to serve as Chief of Police. Announcing my next chapter is a bittersweet moment to me, and I will miss serving the residents of our City of One, who will remain in my heart. I cannot express enough my sincere appreciation to our city and its residents. May God continue to bless the City of New Bedford.”