Home / History / The Layperson’s Guide to the Charles W. Morgan 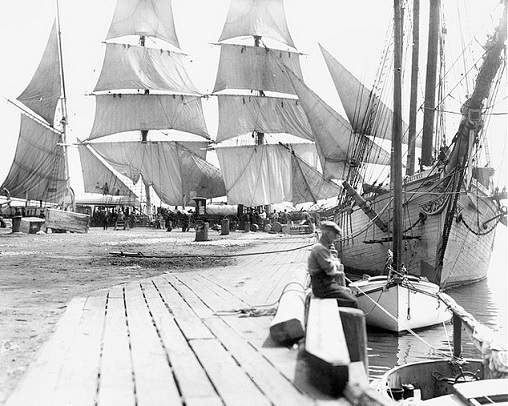 The Layperson’s Guide to the Charles W. Morgan

What’s the big deal about the sea vessel, Charles W. Morgan? Why all the hoopla? It seems like locals are going bananas over the upcoming visit of the vessel to New Bedford this summer. Why is that? Here is our guide for the layperson, or average Joe without all the historic fluff to make you drowsy. We’ll keep it interesting, and place some wonderful historic photos that you all love.

Just the -not so boring- facts, ma’am.
The Charles W. Morgan was built in July 1841 right here in New Bedford. Indeed, at Jethro and Zachariah Hillman’s Shipyard at the bottom of Maxfield Street – which “turns into” Hillman Street until it runs into the harbor. Hillman Street was named after their father, Zachariah who was the commander of the first uniformed militia in New Bedford in the 1820s. The War of 1812 wasn’t even over for a decade and there was yet to be an official police force. These Hillman’s were the same fellows who tried to stifle the mob violence that revolved around New Bedford’s “brothel in a ship,” the Ark.

The 113′ foot long, 351 ton ship would one of many to be owned by New Bedford whaling mogul, Quaker, and Pennsylvania native, Charles Waln Morgan. It took more than 30 craftsmen, a total of 7 months at the cost of $26,877 to build her. Her main truck or mast for you landlubbers, stood 110′ above the deck. Her masts held a whopping 13,000 square feet of sails and was one of a few ships, that had a tryworks* on deck, as opposed to paying someone else to do it. Because of this she had a rather large crew of approximately 30-35.

She would serve the Morgan family on many voyages until America’s largest whaling firm, New Bedford based J.&W.R. Wing Company, purchased her in the middle of the Civil War in 1863. She continued as a whaler through 1921, making 37 voyages, totaling exactly 80 years. She also had a part-time career as an “actor” in three movies from 1916-1923.

While sitting in the harbor on the night of June 30, 1924, a steamer called the Sankaty caught fire and drifted into the Morgan and set her afire as well. Poor gal. Here she was with no industry to ply her trade for, looking forward to retirement and she gets nearly burnt down. She would have certainly been destined to be trashed if it wasn’t for one of the world’s richest men, Col. Edward Howland Robinson Green, son of the “Witch of Wall Street,” Hetty Green. He tossed lots of money at her, then brought her to his Round Hill Estate, embedded her in the sand, then exhibited her.

In November of 1941, she was sent to rest at Chubb’s Wharf, Mystic Seaport. In 1968, a restoration project did a bang-up job on restoring her structurally. This was followed in 1974, with some work on her hull. Finally, the most recent restoration project was undertaken in 2008, she had major work done on the keel (“fin” at the bottom), the bow (front) and the stern (rear). On her 172nd anniversary, July 21, of 2013, she was re-launched into the Mystic River.

She will then make her 38th voyage with stops in New London, Conn., Newport, Vineyard Haven, New Bedford (yay!), Boston, back to New London, a stop at the Cape Cod Canal Mystic Seaport before returning to her home at Mystic Seaport in August 2014. The full itinerary can be read here and the specifics on the New Bedford visit can be seen here. To see if you had a relative that sailed on the Charles W. Morgan, check the New Bedford Whaling Museum’s Crew List Database.

What’s all the hoopla about?
The short and easy summary of why the Charles W. Morgan is a big deal is because it is the oldest wooden whale-ship on the planet. Whaling gave America in general, and New Bedford specifically, a massive economic boost and contributed to making both financial powerhouses. It served a total of 80 years generating massive amounts of revenue. That means it has a tremendous value in the nation’s and New Bedford’s history. In fact, it was listed on the National Register of Historic Places and designated a National Historic Landmark in 1966.

Of great historic importance to America and the South Coast. Check.

How about the 1,000 souls who worked as crew on the Morgan? The scores of craftsmen that restored it? The docents that worked on it in an historic capacity? It has generated income for countless people whose families have benefited. It has put supper on the table, paid mortgages, developed bank accounts, or simply placed priceless smiles on thousands of faces. Imagine how many tens of thousands of people that this ship has affected by its existence!

So, when a multi-million dollar restoration project was undertaken in 2008 at her home in Mystic Seaport, she garnered everyone’s attention. Everyone wants to see this almost magical ship. If it weren’t for the whaling industry, and vessels like the Morgan, New Bedford would not be the same. Not by a long shot. Countless more will be affected.

We will be able to climb aboard the Morgan and walk the very same footsteps as the 19th century whalers – great men who had the fortitude, resilience and doggedness to go to sea for up to 3 years at a time. Men who made enormous sacrifices, to take care of their families. We’ll be able to share the tread of men of character that helped found the greatest nation on earth. You will be able to stand on the deck and declare “I am standing on vessel that played a pivotal role in history – America’s, the South Coast, and New Bedford’s.” A privilege, I will be honored to receive.

That’s why it’s a big deal. And it’ll be worth it every penny.

* For you landlubbers, a tryworks is a facility that melts whale blubber, and filters it to produce barrels of oil for lighting, heat, and more.

When Joe isn't writing, he's coaching people to punch each other in the face. He enjoys ancient cultures, dead and living languages, cooking, benching 999#s, and saving the elderly, babies and puppies from burning buildings. While he enjoys long walks on the beach, he will not be your alarm clock, because he's no ding-a-ling.
Previous All Friends Catering Places Greater New Bedford on the BBQ Map!
Next Five New Bedford Neighborhood Markets Pledge to Offer Healthy Food and Drink Options