Yesterday afternoon around 12:30pm New Bedford police, fire and EMS responded to a vehicle that flipped onto its side on Route 18 in ‪New Bedford‬. A man was extracted by New Bedford fire fighters and was seen walking around before being taken by ambulance to the hospital.

Here is some dramatic footage of our amazing New Bedford Fire Department fire fighters battling a house fire and saving three dogs on a third floor apartment at 13 Abbott Street in ‪New Bedford‬. One man suffered burns and was sent to the hospital. The fire fighters and animal control recovered three dogs and a rabbit. The fire started from a kitchen grease fire, but the NBFD limited the damage to the third floor.

Det. Scott Brown is looking to identify this male from an unlawful bank transaction where the victim’s account was compromised. Anyone with information is asked to contact him at 508-991-6300 ext. 79508 or leave an anonymous tip at 508-961-4584.

Standard & Poor’s Rating Service (S&P) has reaffirmed New Bedford’s AA- bond rating and the City has maintained the highest bond rating it has achieved in at least the last four decades. The AA- rating was first awarded to New Bedford in January 2014 and the reaffirmation of the rating puts New Bedford again among the top half of all issuers of municipal debt in the Commonwealth of Massachusetts.

In its report, S&P cited a number of factors supporting the strong rating, including:

· Increased development throughout the city that has spurred improved market values and led to a stronger New Bedford economy.

· S&P raised the classification of the City’s financial management from “strong” to “very strong”- the highest rating attainable for the category. In its rating, the agency cited the City’s financial policies and practices in place and the development of a five-year long-term financial plan as the basis for the upgrade.

The AA- rating has had an ongoing positive effect on City finances. Investors reacted very favorably on Thursday to the sale of $14,262,000 in General Obligation Bonds; accepting lower interest rates than forecast, and saving New Bedford approximately $1 million in financing costs over the life-time of the debt, meaning that the City will save more than $3.6 million in financing costs over the lifetime of bonds issued since last year’s upgrade.

Credit agency ratings are utilized by investors to gauge a municipality’s financial strength and the desirability of its debt. The “AA-” rating, the fourth highest rating on S&P’s scale, is the highest rating the City of New Bedford has received since at least 1970, and will continue to result in significant reductions to the City’s future debt service expenditures.

Mayor Mitchell explained the importance of maintaining the City’s bond rating and recent bond sale, “The reaffirmation of New Bedford’s bond rating is a clear vote of confidence in all of the hard work we’ve done to properly manage the City’s finances. I am very pleased that our strong financial policies and practices were a key factor that helped to maintain New Bedford’s favorable rating.”

The City’s Chief Financial Officer, Ari Sky, noted the impact of the S&P rating on the City’s finances and overall reputation: “To secure and maintain a AA- rating is a significant achievement for the City, and is indicative of New Bedford’s positive standing in the financial markets. Our favorable rating has yielded positive results, both in terms of favorable interest rates, and the City’s marketability for economic development.”

Yesterday morning at approximately 9:30am a 22 yr. old New Bedford man was robbed of his cell phone in the 800 block of Purchase St. He was not harmed.

Martin McDonald was formally arraigned this afternoon in Attleboro District Court. Mr. McDonald, 35, of Weymouth, is charged with murdering his estranged wife in Norton last night.

The defendant was ordered held without bail after today’s arraignment and will be transported to Bridgewater State Hospital for a criminal responsibility competency mental health evaluation. He is due back in court for a pretrial hearing on March 2.

At 7:25 p.m. Wednesday, Norton Police received a 911 call from an individual in an apartment at 2 Holmes Street regarding a woman being stabbed. When police and fire personnel entered the apartment, they located the victim unresponsive. She was immediately transported to Sturdy Memorial Hospital in Attleboro, where she was pronounced dead. The victim has been identified as Julie A. Meede, 34, of 2 Holmes Street, Norton.

About a minute after the 911 call, a state police radio dispatch was received regarding a two car crash on Route 495 in Norton just south of the Route 123 interchange. Preliminary investigation by Trooper Christopher Roy indicates a Dodge Ram pickup traveling on Route 495 southbound crossed the grass median and entered the northbound side of the highway, where it collided with a Nissan.

The operator of the Nissan, Kathryn Degnan, 30, of Smithfield, RI, was transported to Rhode Island Hospital, but has since been treated and released.

The operator of the Dodge Ram was identified as Mr. McDonald, 35, who currently resides in Weymouth.

Mr. McDonald, the estranged husband of the Holmes Street victim, Julie A. Meede, was charged late last night with murder.

The investigation is being coordinated by Assistant District Attorney Stephen Nadeau, who also handled today’s arraignment.

DIstrict Attorney Thomas M. Quinn III urged the victims of any crime, including domestic violence, to call 911 in an emergency. SafeLink, a statewide Domestic Violence Hotline, can be reached at 877-785-2020. SafeLink is answered by trained advocates 24 hours a day in English, Spanish, and Portuguese, as well as TTY at 877-521-2601. It also has the capacity to provide multilingual translation in more than 140 languages.

Yesterday afternoon at approximately 3:30 p.m., Trooper Jason Trout of the Troop D Community Action Team (D-CAT), was on patrol on Route 24 in the town of West Bridgewater. Trooper Trout observed a Chrysler Sebring commit a motor vehicle violation. Trooper Trout stopped the vehicle as it exited Route 24 onto Route 123.

Trooper Trout spoke to the driver, identified as KEVIN A. GREEN, 23, of North Randolph, and the passenger, identified as ATIYANA C. PHILLIPS-LAWSON, 19, of Dorchester. Trooper Trout returned to his cruiser to process the paperwork. The vehicle then fled at a high rate of speed down Manley Street in Brockton. At times, the fleeing vehicle passed vehicles in the opposite lane, forcing other motorists off the roadway.

While Trooper Trout attempted to catch up to the fleeing vehicle, Trooper Edward Blackwell observed the vehicle cross Route 106 into a Lowe’s parking lot. As Troopers Trout and Blackwell converged in the area, the vehicle fled out of a gated area, through the Chili’s Restaurant parking lot, then became disabled on a snow bank.

Both GREEN and PHILLIPS-LAWSON were placed in custody. A search revealed both occupants were in possession of a loaded 9mm handgun and approximately 233 grams of marijuana, packaged for distribution.

GREEN and PHILLIPS-LAWSON were placed under arrest and brought to the State Police Middleboro Barracks for booking.

GREEN was charged with the following offenses:

PHILLIPS-LAWSON was charged with the following offenses:

Both GREEN and PHILLIPS-LAWSON were held without bail, pending their arraignment in Brockton District Court.

No further information is available. Please do not contact the barracks directly.

The Bristol County District Attorney’s Office, Norton Police and Massachusetts State Police Detectives assigned to this office are actively investigating a homicide, which occurred this evening in Norton.

At 7:25 p.m., Norton Police received a 911 call from an individual in an apartment at 2 Holmes Street regarding a woman being stabbed. When police and fire personnel entered the apartment, they located the victim unresponsive. She was immediately transported to Sturdy Memorial Hospital in Attleboro, where she was pronounced dead. The victim has been identified as Julie A. Meede, 34, of 2 Holmes Street, Norton.

About a minute after the 911 call, a state police radio dispatch was received regarding a two car crash on Route 495 in Norton just south of the Route 123 interchange. Preliminary investigation by Trooper Christopher Roy indicates a Dodge Ram pickup traveling on Route 495 southbound crossed the grass median and entered the northbound side of the highway, where it collided with a Nissan. The operator of the Nissan, a 30-year-old Smithfield, RI woman, sustained serious injury and was transported to Rhode Island Hospital.

The operator of the Dodge Ram was identified as Martin McDonald, 35, who currently resides in Weymouth.

Mr. McDonald, the estranged husband of the Holmes Street victim, Julie A. Meede, was charged late this evening with murder.

Mr. McDonald is scheduled to be arraigned tomorrow morning in Attleboro District Court. 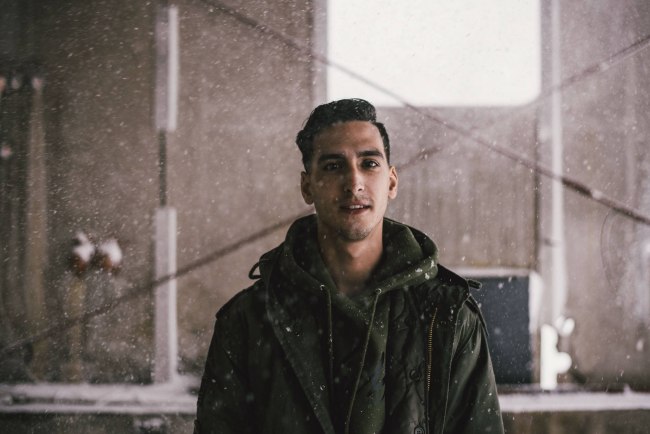 JB works for his family’s business M&R ScreenPrinting, which was started in the basement of his grandfather’s house in 1982. The business continued to grow and expand up until 1996, when his grandfather decided to retire and sell the company to an outside party.

In 1990 JB’s father, John, lost his job as a Phys Ed teacher due to city cut backs. He then started working for his father-in-law’s company to provide for his family. After several years of managing the shop, he then with a partner purchased the company. Fast forward 20 years and JB now works with his entire family to keep the business running smoothly.

After spending a few years going for an engineering degree, JB felt that he didn’t want to take that route in life and switched into the business program at #UMassDartmouth. Upon entering the program talks between his sister, Sorrell, began about starting a clothing company. In 2014, in an attempt to put his business knowledge to use, he and his sister released Wicked Clothing’s first line and met mixed results.

Not satisfied, JB took the initiative to research and learn the market to better implement his vision. In 2015, with much gained experience and knowledge he, working together with local photographer Jonna Mojica, launched a summer and winter line, which became pivotal for JB and the future of Wicked.

Now fulfilling orders across the country and having some prominent faces in the fashion world co-signing and wearing his apparel, he can only be thankful. #NewBedford and the culture here has helped inspire and motivate the creativity he has poured out into his work. His hope for this year is to get his line into stores, while continuing to push the company’s online presence.

“I just encourage everyone to chase their dreams. New Bedford is a place with so much talent and underrated skill, we just have to come together and make it happen.”