Thursday evening, New Bedford teachers voted to ratify the three-year contract, which will provide more planning time to elementary classroom teachers and result in the hiring of more music, art, physical education, health, and technology specialist teachers across the district, meaning weekly access to these important classes for all elementary students in the city.

Since 1975, elementary schools in New Bedford have released early on Fridays, leaving city students behind as the only children in a public school district in Massachusetts without a full week of school, and denying their access to art, music, physical education, health, and technology.

“This is a landmark agreement that provides expanded learning time for our elementary students including more physical education, art and music. The contract also provides elementary school teachers more common planning time which is to be led by their fellow teachers. Our students and their parents deserve full days of learning, this agreement enables that and I am grateful to the teachers for their support,” said Mayor Jon Mitchell.

Superintendent Pia Durkin said the New Bedford Educators Association made history in the city with their dedication to providing more to the children of New Bedford.

“With this contract, our kids finally have a full week of school and the art, music, health, technology and physical education every week – just like students in other districts across the state,” said Dr. Durkin. “We commend the hard work of the New Bedford Educators Association and its leadership, and of all NBEA members, in supporting the children and teachers of this city with their vote.”

City on a Hill New Bedford lottery deadline May 4th

City on a Hill New Bedford is accepting student lottery entry forms until May 4th for students interested in enrolling in grade 9 for fall 2016.

City on a Hill is currently accepting lottery entry forms from current 8th graders interested in attending during the 2016-2017 school year. The deadline to submit a lottery entry form is tomorrow, May 4, 2016. There are three ways to enter the lottery. You can call Edwin at 508-441-4756 and a live person will walk you through the entire process and complete the form for you over the phone. You can visit our website at http://www.cityonahill.org/attend-city-on-a-hill-new-bedford/lotteryentryform/ or you can visit our Facebook page at www.facebook.com/coahnb.

About City on a Hill
City on a Hill Charter Public School New Bedford is part of a network of three college preparatory high schools in the cities of Boston and New Bedford. Each City on a Hill school is tuition-free and open to all students. CoaH schools do not have entrance exams; students are admitted by a random lottery.
Serving students who are traditionally underserved by the public school system, City on a Hill has college-prep academic standards for all students, a strong and safe school culture, and the commitment to the structures and supports that help kids reach those high standards. With a strong emphasis on citizenship, City on a Hill teaches students that they have the power and right to make changes in their school, communities, and city.

People learned how to save a life with free hands only CPR training this past Sunday at the Greater New Bedford Boys And Girls Club as part of the New Bedford Wellness Initiative​ program.

After Jasmine Guy’s (A Different World, Harlem Nights) Master Class in Acting given to New Bedford High School Students yesterday, a few of the students were able to perform a monologue. Here’s Lillianne Condez’s performance.

We stopped by Keith Middle School this week to talk to some of the students in the robotics program. The kids are preparing for the Massachusetts FIRST Tech Challenge State Championship on 27 February at Natick High School. Keith Middle School is the only middle school in the district with a program like this. Here are the students showing us their newest robot and the software they are writing to control it.

We caught up with actress Jasmine Guy (A Different World, Harlem Nights) as she offered a Master Class in Acting to New Bedford High School Students on February 4th, 2016. Video by Josh Souza / New Bedford Guide.

Nationally known television, stage and film actress Jasmine Guy will be in New Bedford to star in “Raisin’ Cane: A Harlem Renaissance Odyssey” at The Zeiterion Performing Arts Center on Friday, February 5.  In addition to her evening mainstage performance, and a 10:00am performance for regional schools, the Zeiterion has arranged for Ms. Guy to host a free master class in acting with New Bedford High School theater students Thursday, February 4 from 1:00-2:00pm in New Bedford High School’s Little Theater.

“New Bedford High School offers outstanding visual and performing arts opportunities, and we’re excited to welcome Jasmine Guy’s master class in theatre to our school,” said Bernadette Coelho, New Bedford High School Headmaster. “This great opportunity through a partnership with the Zeiterion Performing Arts Center will give our students the chance to experience a professional, high-quality acting class to broaden their backgrounds in the performing arts.”

Ms. Guy will coach actors in the art of monologues to improve their work and process.  By sharing her professional experience in television and film, Jasmine will focus on the process of creating reality from the imagined.  The workshop will center on characterization, presentation and discovery.  Several students from the class will be selected to present monologues and receive one on one instruction, while the full class observes and learns.

Lynn Souza, Director of Fine Arts says, “The experience will be incredibly valuable for the students because they will get immediate feedback from a working professional in the field.  They are excited and cannot wait to welcome Ms. Guy to New Bedford High School.”

Jasmine Guy’s free master class in acting is part of the The Zeiterion’s diversity of programs that deepen students’ curiosity and creativity, and open their minds to a world of possibilities. Zeiterion programs for students include the SchoolTime Performance Series, serving 30,000 children throughout the region, The Teen Ambassador Program, The Creative Classroom and more. For more information about The Zeiterion’s education offerings, please visithttp://zeiterion.org/category/education/.

New Bedford Educators Association raise $5,300 worth of supplies for kids in need

During their annual fundraising drive, the New Bedford Educators Association and New Bedford Public School nurses raised more than $5,300 to purchase coats, educational supplies and hygiene items for kids in need. Earlier in the school year, school nurses identified supplies needed and then picked them up at Keith Middle School yesterday to distribute to the kids at their school.

Casimir Pulaski School shifted significantly from a Level 3 school to a Level 1 school; William H. Taylor School moved from Level 2 into Level 1; and Jireh Swift School remained a Level 1 school. To increase in level as Pulaski and Taylor did, students must demonstrate growth by meeting goals set at the school level, including performance on standardized assessments; this ranking is also based on performance over four years.

The city’s middle schools, all three of which were ranked in the 5th percentile statewide in 2014, have improved in their percentile rankings and have all moved out of the bottom 5th percent:

Progress Across the District

With the 16 New Bedford schools that increased their percentile ranking, approximately 8,330 students attending these schools are now outperforming more of their academic peers from across the state than they had been in 2014.

The Sgt. William H. Carney Academy increased to the 50th percentile, previously remaining consistently stagnant in the 42nd and 43rd percentiles for years; Carney has now attained the highest percentile in the district.

School districts who took the PARCC assessment this year were subject to a ‘held harmless’ clause from the DESE, meaning that schools whose percentiles dropped would not be considered for being moved down by accountability levels. 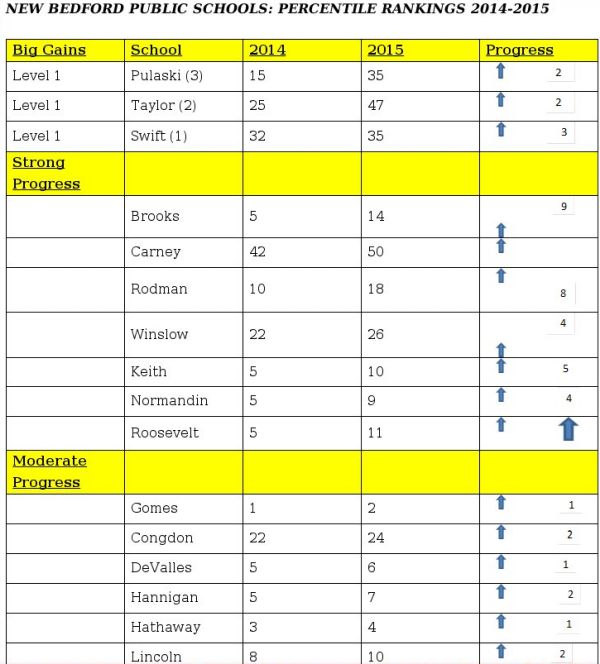 “The news of the state’s accountability report affirms the work that staff and students across our district are doing,” said Dr. Durkin. “These improved rankings are our stories of success – at our three Level 1 schools, a rise in percentile rank at all three middle schools, strong growth at four elementary schools and increases at six other elementary schools. Like the results of our PARCC assessment, these rankings show that our students can succeed and that we are building an excellent school system for all kids in New Bedford.”

“We remain concerned about Level 4 school Hayden-McFadden as it is in year four of the transformation school improvement model, and we will be carefully reviewing how we are working there so that we can reset the conditions that will lead to much stronger, accelerated progress,” she added. “New Bedford High School, in its first year of turnaround, is moving ahead in ensuring the supports in place are being utilized to their fullest extent. John Avery Parker School has adjusted the models for how staff is serving students and is on the right track toward progress for every Parker scholar.”

“These results reflect real progress in our schools. Much work remains, but it’s clear that the administration and teachers are moving the New Bedford Public Schools in the right direction,” said Mayor Jon Mitchell.