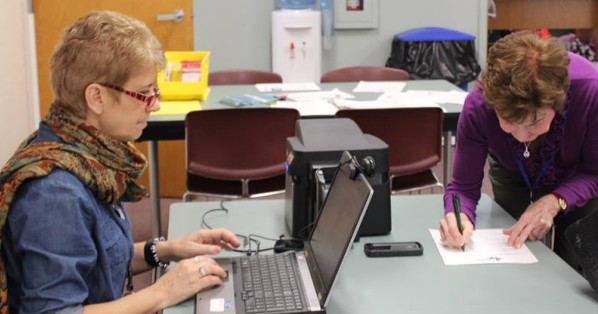 Tina Marie LePage, manager of public programs at the Bristol County Sheriff’s Office, helps a woman at the senior center in Seekonk get a Senior Safe ID.

The good news: A local senior citizen was well enough to be discharged from a psychiatric hospital.

The bad news: The octogenarian was sent home with no medication and, without proper identification, had no way to obtain it.

A new program at the Bristol County Sheriff’s Office is closing that safety gap for local senior citizens.

Launched in March, the Sheriff’s Office is now offering Senior Safe IDs. The identification cards feature a person’s name, picture and address on the front and an emergency contact on the back. The cards also come with a lanyard, so seniors can wear it around their necks when out for a walk or out shopping. They’re quick to make and are ready in minutes.

“It takes longer to set up the computer that it does to print the ID,” said Tina Marie LePage, the manager of public programs at the Bristol County Sheriff’s Office.

When Brittany encountered the gentleman mentioned above, she contacted the Sheriff’s Office about getting him a Senior Safe ID. Tina met them in the community room of the senior housing complex where he lives and, within minutes, the gentleman had an identification card.

Senior Safe IDs are not a substitute for a driver’s license or an official state ID card. They are simply for safety purposes by offering seniors the ability to always have their name, picture and emergency contact nearby.

While not an official identification card, Brittany said the Senior Safe ID card was “the first step” in what could make a big difference in the gentleman’s life.

“We’re in the process of applying for all his entitlements, and this is one way we can begin to prove who this gentleman is,” she said. “This opened the door. Hopefully now we can work on a safe link phone, Mass Health and eventually senior care options, transportation and even finding him a physician. You have to be able to prove who you are when you go to a doctor’s office.”

The Sheriff’s Office is making Senior Safe IDs across Bristol County. Tina was recently at the senior center in Seekonk making IDs, and was greeted by a large crowd of seniors eager to have an additional layer of safety. She has appointments in Acushnet and New Bedford coming up before Christmas.

Senior centers, housing authorities or other community organizations who are interested in senior IDs can contact Tina at 508-995-6400 ext. 2176 or via email at tinamarielepage@bcso-ma.org.