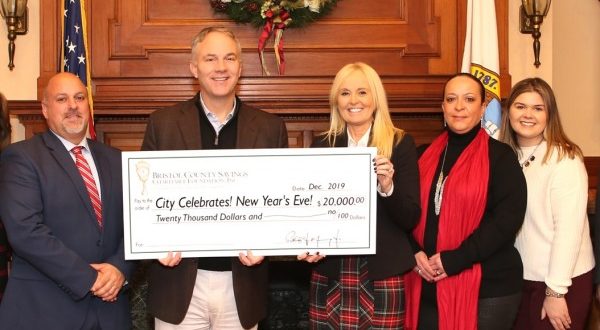 For the tenth consecutive year, Bristol County Savings Bank (BCSB), through its charitable foundation, has awarded a $20,000 grant to the City of New Bedford as part of the Bank’s role as overall sponsor of the current Holiday Happenings and City Celebrates! New Year’s Eve festivities. The city is in the middle of enjoying a couple weekends of exciting and engaging programming which all lead up to a host of family fun activities to ring in 2020 on New Year’s Eve, Tuesday, December 31, including the traditional fireworks display.

This year’s programming includes street performers, stilt walkers, fire-eaters, puppetry, live entertainment, face painting, fortune tellers and more. A full listing of all events is located at http://destinationnewbedford.org/holidays2019/. The New Year’s Eve festivities will include a spectacular firework display on the waterfront at 8:30 p.m. 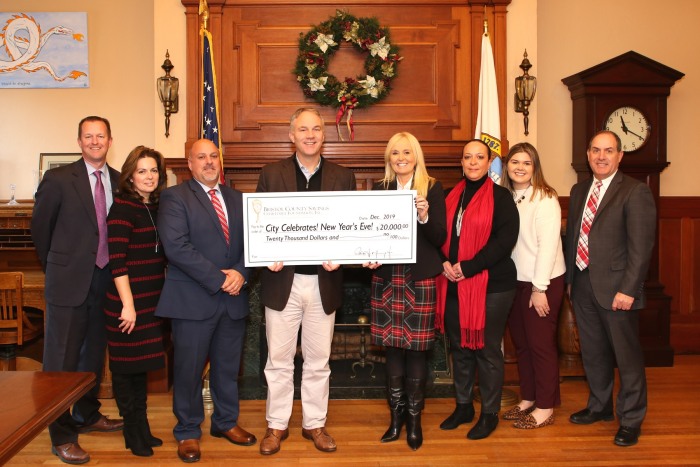 “It’s hard to believe we’ve hit the ten-year milestone of serving as the lead sponsor of City Celebrates,” said Patrick J. Murray, Jr., President & CEO of Bristol County Savings Bank and President, Bristol County Savings Charitable Foundation (BCSCF). “It’s always exciting for us to be a part of what is now a New Bedford tradition of engaging holiday programing for residents and visitors to enjoy and ring in the New Year.” Murray added that since 2007, the Foundation has donated more than $4 million to 501(c)(3) organizations in the region.

“New Year’s Eve City Celebrates in New Bedford is a wonderful opportunity for area families and visitors to enjoy many free, fun events for all ages in our historic downtown,” said Mayor Jon Mitchell. “We’re grateful for the generous support of Bristol County Savings Bank for continuing to sponsor City Celebrates which, along with the many important causes they support, demonstrates the Bank’s commitment to New Bedford and the region.”

Bristol County Savings Bank is an active supporter in the communities in which it serves. The Bristol County Savings Charitable Foundation was established in 1996 as part of the Bank’s 150th Anniversary celebration. Its purpose is to fund needs that contribute to the economic and the social well-being of the people and institutions located in the greater Attleboro/Taunton Region, the greater New Bedford/Dartmouth Region, the Fall River Region and the Pawtucket, Rhode Island Region, with particular emphasis in the areas of education and literacy, economic development and housing for the low- to moderate-income population.