“It is promising that the Mayor’s Commission on Police Use of Force mentioned that police directives are within their jurisdiction. That being the case, we believe it is imperative that the Commission demand an immediate rescinding of the New Bedford Police Department’s Directive 06-71 “High Energy Patrol Initiative” which led to what a Superior Court Judge deemed an unconstitutional stop of Malcolm Gracia and the deadly use of force by Detective Trevor Sylvia and Detective Paul Fonseca murdering a New Bedford child, Malcolm Gracia. The directive also includes problematic language rife with racial overtones.

It encourages police officers to see “middle school-aged children” from New Bedford as “thugs” and “remove them from our city.” This is exactly the type of language that wreaks of unaddressed implicit bias and results in unnecessary, often illegal, use of force against low-income, primarily Black, Brown, and Indigenous youth in our city and across the country.

It is alarming to discover that Mayor Jon Mitchell’s Commission on Police Use of Force believes that those in need of translation services and/or alternatives to Internet access are expected to send the Commission requests for provisions. It is mind-boggling that a Commission that solely sent out press releases in English and electronically would believe that those without internet access or the ability to read English should, or even could, be responsible for requesting translations and alternate means of engaging the Commission.

This scapegoating of effective outreach to all members in our community is troubling. Especially given the fact that community members with English proficiency and Internet access also complained about how difficult it was to find an event flyer, meeting agendas, NBPD Use of Force Policies, and/or registration information for the commission’s first public meeting.

Despite the commission’s claim that their press release included a complete agenda, many members from the community voiced their discontent with the lack of clarity via public comment, messages in the Zoom chat, comments on the FaceBook livestream, and in statements to the local media. The Commission failed to effectively outreach, educate, and inform the community on the meeting’s agenda and goals. Moreover, the Commission avoided answering questions and/or engaging in healthy dialogue with meeting participants.

The Commission is correct, Jon Mitchell is the one who needs to answer all of the community’s questions relating to his criteria for selection of Commission members. To that end, Jon Mitchell we in BREATHE! are still awaiting your answers to the following questions:

We do not believe it is in the best interest of the community and/or victims of police misconduct to submit public comments, questions, or complaints to the Commission on Police Use of Force, the Human Relations Commission, or the New Bedford Chief of Police. Especially considering no steps are being taken to ensure that it is legally wise and safe for members of our community to share stories of their interactions with the city administration or police without risking future civil/criminal cases and without fear of repercussion or retaliation from the police.

Although Counselor Gomes stated that he would personally guarantee their safety, that is not something he has the authority to do and that is not a promise backed by any legal document. We do not believe having victims of police misconduct reach out to individuals and organizations with close ties to the police or the city administration to be a best practice or to create a safe, inviting space for people who have had negative experiences with the police to come forward.

The oversight board must be independent, not only from the police department, but also from elected politics, and have a fixed budget, so that it is able to effectively and independently investigate complaints. The board’s structure needs to be designed by the community, not the Mayor. This ensures true community voice and perspective centered around the needs of those most impacted by police violence, abuse, and misconduct. The leadership and majority of the board membership must be victims of
police misconduct and/or their family members, with other local citizens nominated by grassroots civic and community-based organizations trusted by the communities most impacted by the criminal justice system.

Ultimately, we in BREATHE! felt that Mayor Mitchell’s Commission On Police Use of Force’s “public” meeting was poorly advertised, failed to educate the community regarding the scope of the commission’s work, and was a feeble attempt at community engagement. When questioned about efforts made to include diverse voices from the community, the commission had no answer. We believe any legitimate conversations around police policies should include youth, non-English speakers, Black, Indigenous, LGBTQ, communities of color, folks with limited Internet access, and victims or family members of those harmed or killed by police.

When meeting participants questioned the commission we were met with silence, evasion, aggression, or a condescending tone from chairman Brian Gomes. The Commission erroneously claimed they can only review three policies on police use of force in isolation. This is not true. Police use of force policies cannot be separated from all other policing policies or the impact they have on members of our community.

The Commission’s own admission that they have limited purpose and scope emphasizes the need for an independent and fully funded oversight board with subpoena power. This oversight board would create accountability and help to protect our community from a racist ecosystem of police policies and the organizational culture that gets built alongside it.

In the last month, we have also noted that not one member of Mayor Jon Mitchell’s Commision on Police Use of Force has attended any of the “The Malcolm Gracia Story: A Presentation of Evidence” Zoom calls to hear about the details of one incident of deadly use of force that took the life of a young person from our own community. Given that the Commission is reviewing New Bedford’s Police use of force policies, we imagined the Commission would prioritize attendance at these important public presentations, especially considering the fact that Malcolm Gracia was a 15-year-old child who was murdered by police use of force after having his civil rights violated when the New Bedford Police Department illegally stopped him on May 17, 2012.

Additionally, after the Commission’s noticeable absence from Part 1 of “The Malcolm Gracia Story: A Presentation of Evidence” on Sunday August 30th we sent a second email invitation and letter to Jon Mitchell and the entire Commission addressing their absence. Yet, shamefully not one member from the Commission has prioritized any of the presentations of evidence in this important case involving New Bedford Police Officers use of deadly force on a child. It is our hope that the Commission will prioritize the last presentation of evidence scheduled for Sunday October 4th at 2pm by registering via an email to MalcolmGraciaEvidence@gmail.com.

We also insist that the Mayor’s Commission on Police Use of Force publish a public statement regarding Malcolm Gracia’s murder via excessive use of force by the NBPD including the following demands:

● The immediate firing of New Bedford Police officers Tyson Barnes, David Brown, Paul Fonseca, Brian Safioleas, and Trevor Sylvia for their involvement in the murder of Malcolm Gracia.
● That Detectives David Brown, Tyson Barnes, Paul Fonseca, Trevor Sylvia and Sgt. Brian Safioleas be charged for filing false police reports based on their affidavits filed on October 22, 2018 in the case of Christina Gracia v. City of New Bedford et al. Docket No. 1573CV00467.
● That Detectives David Brown and Tyson Barnes be charged for violating Malcolm Gracia and Adam Carreira’s civil rights.
● That Detective Trevor Sylvia be charged with Second Degree Murder based on the evidence in the case, which shows that Detective Sylvia shot Malcolm three times in the back as he was running away from officers.
● That Detective Paul Fonseca be charged with First Degree Murder based on the evidence in the case, which includes Fonseca’s statements to Massachusetts State Police.
● Creation of an independent and fully funded civilian oversight board with subpoena power led by those most impacted by structural racism and state-sanctioned violence.
● A thorough and independent investigation into NBPD’s use of surveillance technology, including its costs relative to its efficacy, the violation of civil liberties, and most importantly, its disparate impact on communities oppressed by structural racism, class domination, and xenophobia. 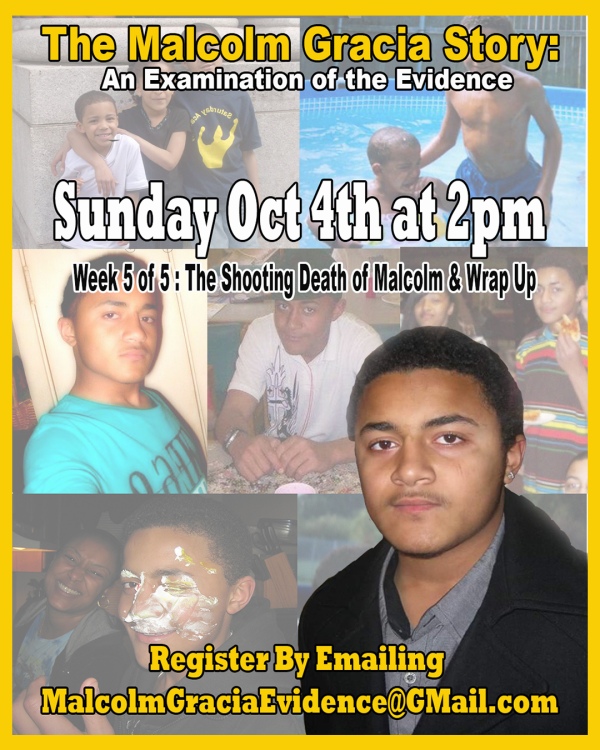