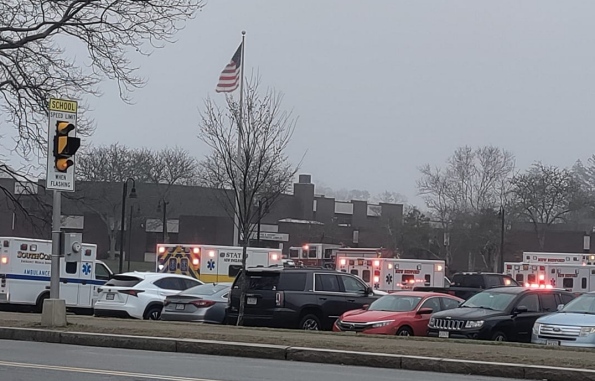 Preliminary reports suggest that there was an accident in a Chemistry class on third floor where students were mixing chemicals. Eyewitness reports on scene stated that the class was left unattended. The regular teacher was absent today and school officials were in the middle of finding a substitute teacher.

“I was in that class.” said Nicole DaCosta. “The teacher was out and they didn’t put a sub in there. I told the assistant principal and nothing was done about it.”

“This morning two NBHS students were evaluated by paramedics and transported via ambulance to St. Luke’s Hospital for evaluation of mild symptoms from exposure to chemicals in a science lab.

Out of an abundance of caution, twenty-two additional students were transported via school bus with NBEMS paramedics and school personnel on board to St. Luke’s Hospital. NBFD hazardous materials personnel and NBPS staff are providing support information to hospital staff.

NBFD personnel have conducted air monitoring at NBHS and have determined that it was safe for classes to continue.

NBPS staff, NBFD Fire Investigators, and the NBPD are investigating this incident. NBFD personnel will remain on scene to ensure the safe air quality of the school.” -New Bedford Fire Department.