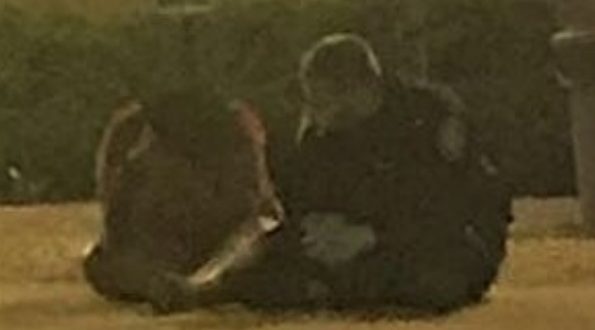 “To the woman from Watertown who sent the enclosed letter to the BPD’s official Facebook account on Thursday, May 7, 2020, praising Officer James Hosea of District C-11 in Dorchester for his empathy and professionalism, we say, ‘Thank you.’

In addition to being forwarded to the Office of Boston Police Commissioner William Gross, the letter will also be added to Officer Hosea’s permanent personnel file.

The letter reads as follows:

‘Good evening. I live in Watertown. I just wanted you to know what a wonderful person Officer James Hosea is. I was at the Angell Memorial in Jamaica Plain with my dog when I saw Officer Hosea bring a couple in with a dog that had been hit by a car. He was absolutely wonderful to those people. To the point of sitting on the ground with the woman to console her. He has a beautiful soul.

I feel grateful to have witnessed such a beautiful act of humanity. So much so, I actually took a picture of the moment and called Officer Hosea over to me so that I could tell him what a beautiful thing he did for that woman. He was very humble.”

The facts and circumstances surrounding the original incident are included below:

At about 10:13pm, on Thursday, May 7, 2020, Officer Hosea responded to a radio call for a dog struck by a vehicle in the area of 538 Talbot Avenue in Dorchester.

On arrival, Officer Hosea observed Boston EMS on scene applying oxygen to a small dog wrapped in a blanket. When the dog’s owners arrived on scene, due to the dog’s grave condition, Officer Hosea asked and instructed them to get into his police cruiser so that he could transport them to the MSPCA Animal Hospital in Jamaica Plain.”-Boston Police Department.

When Joe isn't writing, he's coaching people to punch each other in the face. He enjoys ancient cultures, dead and living languages, cooking, benching 999#s, and saving the elderly, babies and puppies from burning buildings. While he enjoys long walks on the beach, he will not be your alarm clock, because he's no ding-a-ling.
Previous Massachusetts Environmental Police seize catch at Fairhaven dock
Next Millbury crash leaves Braintree man dead, Rhode Island man with serious injuries