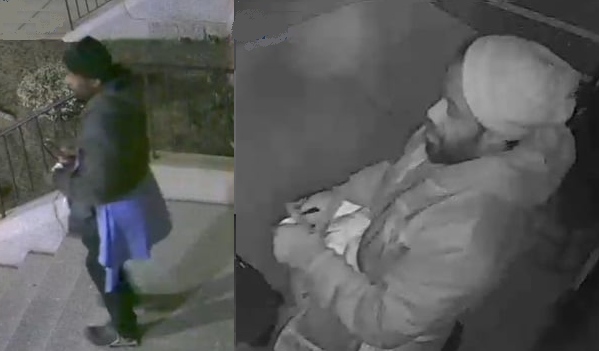 “BPD Community Alert: The Boston Police Department is Seeking the Public’s Help to Identify Suspect Wanted in Connection to Recent Vandalisms at Churches in Dorchester and South Boston.

BPD Community Alert: The Boston Police Department is currently seeking the public’s help to identify a male suspect wanted in connection to two incidents of vandalism at local area churches located in Dorchester and South Boston.

INCIDENT #1: At about 6:30 AM on Friday March 12, 2021, officers assigned to District C-6 (South Boston) responded to a vandalism call at Saint Teresa of Calcutta Church and Saint John Paul II Catholic Academy in the area of 800 Columbia Road in Dorchester. On arrival, officers were informed that an unknown substance had been discovered on several door locking mechanisms, preventing the use of keys to gain entry to the school building. Additionally, the same substance was found on the door locks of the church in addition to a circular bicycle lock which was placed around the door handles of the main front entrance doors.

INCIDENT #2: A short time later, at about 8:00 AM, officers responded to another vandalism call at Saint Monica-Saint Augustine Catholic Church located at 331 Old Colony Road in South Boston. On arrival, officers learned that the same unknown substance had been discovered on all four door locks of the church and that a statue of The Blessed Mother had been knocked over. The party on scene stated that the same statue had also been knocked over on Friday March 5, 2021, but that the incident had not been reported.

The Boston Police Department continues to review the facts and circumstances surrounding these incidents. Anyone with information is strongly urged to contact District C-6 Detectives at (617) 343-4742.

Community members wishing to assist this search anonymously can do so by calling the CrimeStoppers Tip Line at 1 (800) 494-TIPS or by texting the word ‘TIP’ to CRIME (27463). The Boston Police Department will stringently guard and protect the identities of all those who wish to assist this investigation in an anonymous manner.”