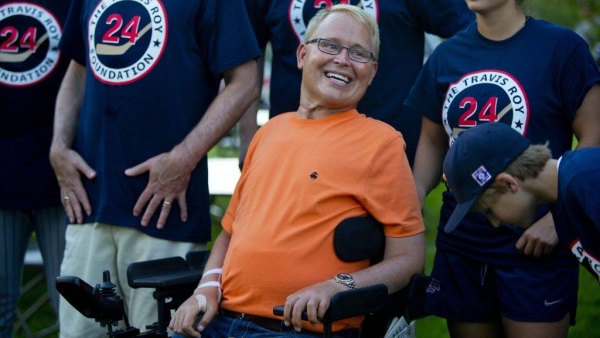 BPD Remembers: Travis Roy, who was paralyzed in a hockey game as a BU Terrier in 1995, passed away this afternoon as a result of complications from living with a spinal cord injury. His injury happened when he crashed head-first into the boards 11 seconds into his first shift.

Travis was instantly paralyzed from the neck-down, and regained partial use of one of his arms. The injury was caught on camera, and broadcast on the news, which resulted in an outpouring of support. The money that was raised for Travis was enough to start his foundation, the Travis Roy Foundation, which has since raised millions of dollars for research to figure out a way to repair the spinal cord after injury. His foundation also gives money via grants that support individuals who need modifications to their homes to accommodate wheelchairs, as well as adaptive equipment and technology to enable individuals to maintain their independence.

The Boston Police hockey team hosted charity hockey games with the benefits going to the Travis Roy Foundation and many members of the BPD had close personal friendships with Travis. He became an excellent motivational speaker and will be sorely missed.

David Estrada, a member of the BPD who had a motorcycle accident that left him paralyzed when he was a Boston Police Cadet in 1995, is a member of the Travis Roy Foundations Research Advisory Board and had this to say about Travis: “I worked with Travis for the past 25 years and to me he is on par with the late Christopher Reeve; they both worked tirelessly to advance research for spinal cord injuries, while at the same time helping countless individuals improve their living situations by providing them with funding so they could live independently in the community.”