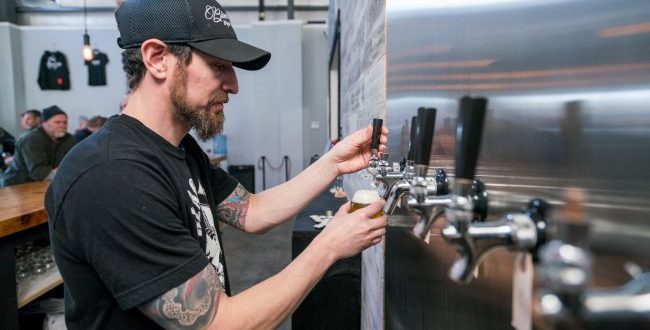 All photos by Josh Souza.

Looking for a new hangout this summer where you can hang out with friends while enjoying the weather with fresh food and drink? Black Hat Brew Works in Bridgewater is the place to check out.

Black Hat offers a diverse variety of craft beer with a draft rotation that changes up weekly.

Whether you’re a seasoned craft beer enthusiast or just a casual beer drinker, Black Hat has a beer for you. Their staple and most popular is the Bridgewater Blonde Ale, which is light and smooth and perfect for those that are “intimidated” about trying craft beer. Other selections include a variety of India Pale Ales, Saisons, Belgian-style brews and robust stouts and porters. 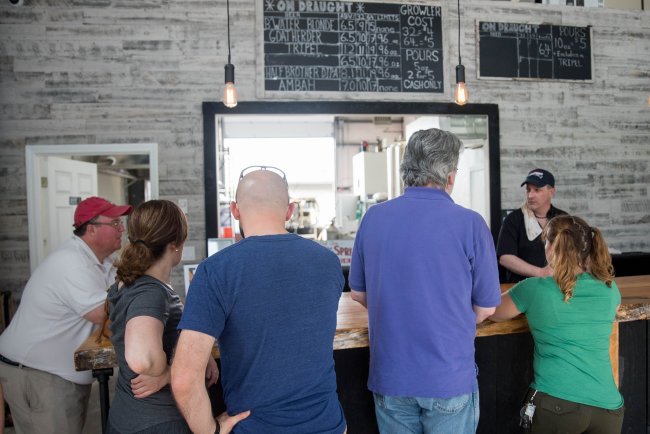 Regardless of what you order, you’ll surely be served with a smile by a growing staff behind the bar, led by owner and brewer Paul Mulcahy who’s joined by his brother Scott Galpin and childhood friend Jay Brown.

From the early beginnings of brewing on a small homebrew system in a shed to celebrating a year and a half at a 2,200 sq. ft. building, Black Hat has just completed some major work expanding their production as well as their taproom for a huge summer.

A new concrete patio installed along the side of the building adds more space to the taproom and the perfect place to relax on a warm summer afternoon. The patio features custom picnic tables, rocking chairs and even a sectional couch.

If you begin to feel a little hungry as you soak up the sun on a Saturday afternoon, fret not as a variety of snacking options will be available for your pleasure. The brewery itself sill begin selling fresh baked pretzels along with prepared spreads of meats and cheeses.

If you’re looking for something a bit more wholesome, each Saturday will feature a different food truck throughout the summer. One week you can catch 10B Pasta Company serving up Italian fare, another week may feature grilled cheeses from Mom on the Go, or even a fresh pizza baked in a brick oven from Fiamma Bella.

All this fun is great for patrons, but some of the serious work is being done behind the scenes (although you can see a lot of the production area through a window in the taproom). As some shiny new equipment arrived over the winter, the brewery is now able to potentially triple production, jumping from 200 barrels of beer produced last year to possibly 600bbls this year. 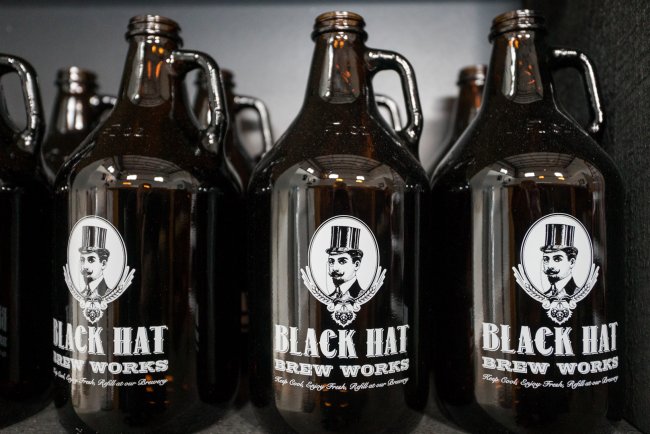 Part of the increased production is thanks to a new partnership with Bog Iron Brewing in Norton, MA. Mulcahy gets to brew his flagship beers such as B’Water Blonde and Ambah at Bog Iron while utilizing his own system to focus on new beers to add into the rotation. This also opens up the possibility of increased draft accounts and Black Hat beer being served in more bars and restaurants plus an additional day of operation. Beginning in June, the taproom will be open Wednesday through Saturday.

What makes Black Hat a great place to visit is their commitment to their beer as well as their fans. They take the time to chat with everyone, and once you’ve visited two or three times, they know you by name and even a little about you. They take pride in friendly service and serving some of the best beer the Bay State has to offer.

However, in the craft beer industry, it’s not really a competition to serve the “best beer,” since everybody has different tastes and like certain beers over others. Instead, the craft beer community takes steps to expose as many breweries as possible to the public so none go unnoticed.

Mulcahy and his team have helped with this by creating the annual South Shore Farmers Brew Festival, which returns for its second year this September. Last year’s festival included a healthy balance of well-known brewers as well as those just starting out plus a homebrew competition for local homebrewers hoping to take the next step and open their own breweries. Oh, and all the proceeds are donated to area charities!

It’s no wonder why these guys are expending both their physical footprint and production less than two years into operation. Every weekend more and more people are flocking to the brewery to try the newest beer on tap, and then bring some home with them in a 32 oz. or 64 oz. growler.

If you’re not sure what to do one of these weekends, just grab some friends and head over to Black Hat Brew Works for an afternoon or evening of great beer and great company.

Previous The Cult’s Ian Astbury Talks About Life on the Road and Human Relationships Ahead of Band’s First Show in New Bedford
Next 7 Reasons to participate in the American Heart Association’s Annual Heart Walk on Saturday, May 13