Key indicators about the COVID-19 outbreak in Massachusetts have for the first time moved in an encouraging direction for several days straight, Gov. Charlie Baker said Tuesday, but as other states are opening up economic activity, officials here still want to see at least two weeks of steady progress.

Ten percent of the new tests reported Monday came back positive, the lowest daily rate since late March when Massachusetts had roughly half the testing capacity. The number of patients actively hospitalized because of the highly infectious virus has also moved on a downward slope in recent days.

While Baker said the state has now seen “for the first time, a few days in a row, the right kinds of trends,” he hinted that a phased reopening of closed businesses cannot safely take place unless the patterns continue.

“We’re still very much in the fight against the virus, but it’s encouraging, I think, for everybody to see progress, given how much hard work and how much sacrifice has been invested in this,” Baker told reporters after he toured a manufacturing facility in Fall River. “As we come to the other side of this and start to determine next steps for going forward, we need to see these numbers continue to fall.”

The newest data released Tuesday afternoon — after Baker’s press availability — held close to the trends Baker cited. Patients hospitalized for COVID-19 increased by three, from 3,539 to 3,542, while the most recent rate of new tests that came back positive slightly increased to 13 percent.

Total confirmed COVID-19 cases in Massachusetts since the outbreak began surpassed 70,000 on Tuesday, reaching 70,271, while 122 additional fatalities brought the death toll to 4,212. 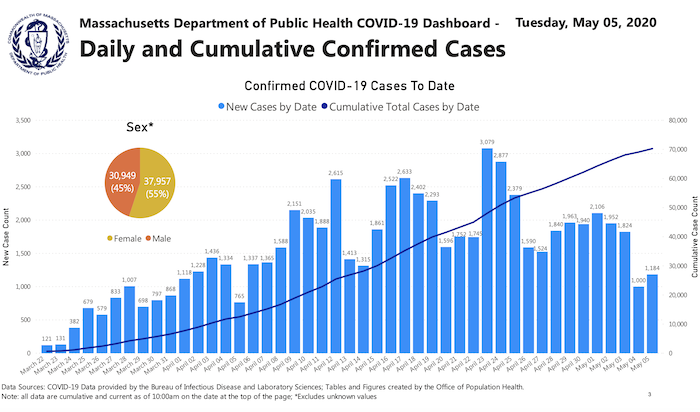 Asked later in his press conference if he wanted to see two weeks’ worth of downward movement in the most informative COVID-19 figures, Baker replied, “No one thinks you need less than 14 days, let’s put it that way.”

Poll results released Tuesday indicate that Massachusetts residents by a wide margin support the shutdown decisions Baker’s administration has made. Eighty-five percent of respondents said they approve of his handling of the crisis, and the same number backed his decision to extend orders closing non-essential businesses and banning large gatherings until at least May 18.

The poll of 500 residents, conducted by Suffolk University, WGBH and the Boston Globe between April 29 and May 2, found that 56 percent of respondents are concerned about their financial situations or employment.

Baker voiced gratitude Tuesday for the millions of residents across the state who have adjusted to a new reality and endured economic hardship to help limit the spread of the virus.

“From my point of view, the most amazing part of all this is people understand and have communicated that they get the trade-offs,” Baker said. “They understand that slowing the spread, doing the distancing, sheltering in place, whatever you want to call it, losing an opportunity to work for some period of time, is something that has to be part of the answer to how we actually get back to work in a safe and effective way.”

Drawing from his experience touring Merrow Manufacturing on Tuesday, Baker said a key lesson of the COVID-19 pandemic is the value of domestic supply chains and manufacturing key products within Massachusetts whenever possible.

Acquiring gear such as personal protective equipment has been one of the largest challenges of the public health emergency. Governors, including Baker, on multiple occasions voiced frustrations about being outbid for gear by the federal government or described difficulty trying to secure orders from overseas.

“It’s not just that the supply chains seize up when you end up in a situation like this,” Baker said. “The price you pay for whatever you get out of that supply chain is extraordinarily high, and it’s extraordinarily high because of the scarcity associated with being able to access the product, but it’s also high because the cost of getting it from wherever it is to here is enormous.”

By comparison, Baker said, moving products from Fall River to elsewhere in Massachusetts is “profoundly cheap.”

Merrow Manufacturing has been working with the administration — one of several companies involved in a coronavirus-response partnership — to adapt its textile operations to produce personal protective equipment for health care workers on the front lines of the pandemic, particularly isolation gowns.

The administration has an order with Merrow for 2.5 million gowns. By the end of the summer, the Fall River plant will be able to produce 700,000 gowns per week, Baker said.

Charlie Merrow, the company’s CEO, said he hoped to provide somewhere between 4 million and 5 million pieces of fabric gear to Massachusetts, Rhode Island and potentially other states by the end of the year.

Merrow said the crisis could spark a revival in American manufacturing as a costlier, but more immediately available, option to meet local needs.

“We are a reliable and durable supply chain that will be here regardless of what happens outside of the borders,” he said. “There is no question that our product is much more expensive to build than a product that’s built in China. What it is is available right now to hospitals, and I think that when we revisit and we look at the policies that need to be discussed and implemented after COVID, part of it is going to contemplate how health care systems and how states can have a reliable source of essential medical products when there’s a disruption in imports.”