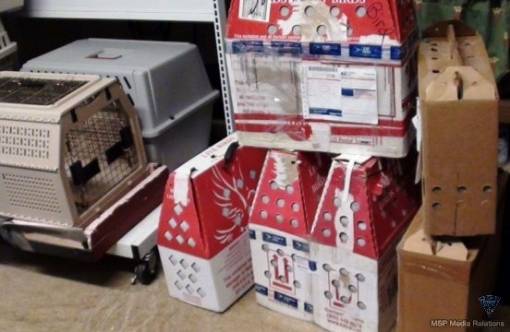 Massachusetts State Police arrested six men Sunday morning after stopping a car in Worcester and finding evidence, including dead chickens and live ones that later had to be euthanized, that the occupants were involved with cockfighting.

At approximately 5 a.m. Sunday, Trooper Jeremiah Dwyer stopped a Honda Odyssey van with Massachusetts plates for motor vehicle violations on the eastbound side of Route 290. After approaching the van, Trooper Dwyer observed a large pile of loose cash under the driver’s seat. During questioning the driver, later identified as RICHARD DIAZ, 30, of Lawrence, stated he and his five passengers were coming from Queens, N.Y., and going to Lawrence. The front seat passenger, later identified as YAMIL A. MALDONADO, 28, of Lawrence, stated that he owned the van and gave troopers consent to search it.

Trooper George Demos of the State Police K9 Section, along with his partner Cayman, responded to assist in the search, as did Trooper Luis Aguirre, who interviewed the van’s occupants in Spanish.

Troopers located a large black trash bag in a hidden compartment under the van’s floor. The bag contained what appeared to be several dead, skinned chickens. Four boxes in the rear of the Honda were also located; each contained a live chicken that had been subjected to procedures related to cockfighting, including having their lower bodies shaved and crests on their heads cut off. Also located in the vehicle was additional cash in the glove box, which, combined with the cash under the driver’s seat, totaled $4,500.

Troopers arrested all six men and charged them with: 1.) Cruelty to Animals; 2.) Possession of Fighting Animals; and 3.) Conspiracy to Commit a Crime. Those arrested were:

The men were transported to the State Police Barracks in Holden where they were booked. They were bailed and ordered to appear at Worcester District Court for arraignment today. DIAZ, the driver, will also be cited for speeding and committing a marked lanes violation.

The chickens were turned over to Worcester Animal Control. State Police have been notified that the chickens had to be euthanized.