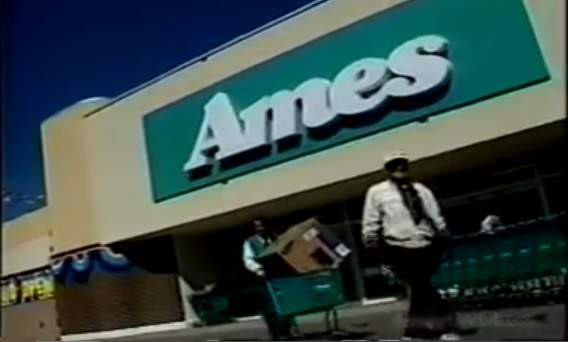 Textile mill origins
The Ames department stores got their start by brothers Milton and Irving Gilman in 1958. Their flagship store was in an old textile mill in Southbridge, Mass. called the “Ames Worsted Textile Company.” The idea for the name wasn’t anything original, they just used the existing name – and sign.

The Ames Worsted company was a descendant of the U.S. Bunting Company which was founded by one of Lowell’s wealthiest citizens, business mogul, and Civil War general, Benjamin Butler. While Ames is a first name, Worsted isn’t a surname. Worsted is a type of fabric made from yarn, which was originally made from a village known for its highest quality: Worstead, England.

A bunting is a worsted style, wool fabric used to make flags and ribbons mostly.

Hence, we go from Ames Worsted, to just Ames. Ames is the first name of Ames Stevens, a wealthy Lowell native who owned and ran the Ames Worsted Textile Company mill. The Ames Department stores are named after this fellow!

Growth and fall
From its inception the store went after a rural market as opposed to being in cities. They felt less competition would be profitable and they were correct. Through the 1970s and 1980s they began a massive expansion and went into an acquisition phase, acquiring chain stores, department, variety stores, most notably the Zayre’s chain of stores.

They spent a monumental amount of money on converting these stores in their own store. Combined with poor economical conditions, and a approve anyone and everyone policy for credit, and profits plummeted as the 1990s approached. They filed for their first bankruptcy in 1990.

Amazingly they returned to profitability within 2 years of declaring Chapter 11. They also returned to expansion and bought the Bradlees, Jamesway, Caldor, Hills and Montgomery Ward chains. By 1998 they were the fourth largest chain in the country with over 00 stores, only beat by Target, Wal-Mart and KMart. Profits were $2.2 Billion dollars annually.

Rapid return to profit; an even quicker collaps
In 1999, the beginning of the end started. Stores began to close at a rapid pace. Eight stores were shuttled that year, 32 the following year, and a whopping 117 in 2001. In spite of still having hundreds of stores still open, the filed for bankruptcy protection in 2001. From 1998-2002 they had lost almost half of their stores.

An executive decision was made to close he remaining 300+ stores and blame was placed on poor sales and shipping woes by Ames’ higher ups. Economists and financial analysts felt that their rapid expansion in general, a poor credit market, the acquisition of the many Hills Department Stores, and Wal-Mart’s expansion were the cause.

Local locations, slogans and commercials
Ocean State Job has taken over many of the sites, however many have remained empty since the chain closed its doors. In the greater New Bedford area there was an Ames at 1024 King’s Highway (where A.J. Wright is), at the North Dartmouth Mall, and 11 Berdon Way, Berdon Plaza (where Shaw’s was) in Fairhaven. If you worked at Ames, you may find many of these forms to bring back memories!

When Joe isn't writing, he's coaching people to punch each other in the face. He enjoys ancient cultures, dead and living languages, cooking, benching 999#s, and saving the elderly, babies and puppies from burning buildings. While he enjoys long walks on the beach, he will not be your alarm clock, because he's no ding-a-ling.
Previous Ocean Explorium offers “Earth Power” activities for February vacation!
Next Activities scheduled at Buttonwood Zoo’s “Will Zoo Be Mine” Valentine’s celebration!