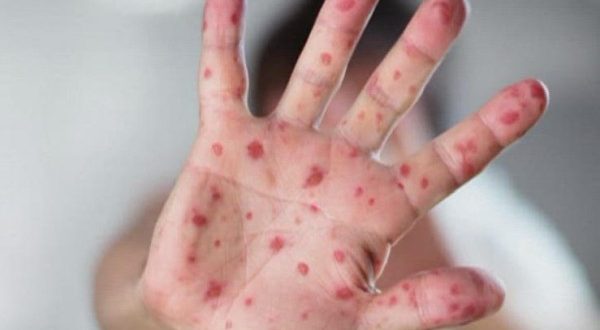 In Austin, Texas health officials stated that one person alone may be responsible for infecting thousands as the unnamed person traversed the city visiting a supermarket and area restaurants over a four-day span before flying off to the O’Hare International Airport in Chicago and spreading it further. It has been two decades since Austin had a single reported case.

What makes the measles virus particularly dangerous is that 9 out of 10 people are not immune, it is more contagious than most diseases, and an infected person may be unaware that they are carrying the virus since it may take up to two weeks to exhibit major symptoms. In that time, an individual spreads the virus with those they share living space with, any direct contact with the mouth or nasal secretions, and with each sneeze and/or cough.

Generally, within 4 days a blotchy, red rash will appear on the head and spread from there to the lower part of the body. Other symptoms follow such as diarrhea, feeling achy, fatigue, white spots inside the mouth, coughing, fever, and “pink eye.” Though rare it may also cause swelling of the brain and death. Secondary bacterial infections may occur such as ear infections or pneumonia.

While there is no treatment available for the virus, a vaccination for measles-mumps-rubella (MMR) can prevent it. Typically limited to developing areas of the world in Asia and Africa, the virus which affects approximately 20 million people a year is gaining new ground in the United States as the “anti-vaxxer” demographic grows. As of 2018, it was the second leading vaccine-preventable disease that causes death in children with “Whooping Cough” or Pertussis ranked first.

In Massachusetts, there have been three reported cases this year, with the most recent case reported in October in Boston which is the city’s first case since 2013. The CDC reported that 2019 has the distinction of having the most confirmed cases of measles infection in the nation since 1992.

For more information about Measles, how it is transmitted, what you can do to prevent it, and more visit
mass.gov/service-details/measles>/font>