Five time Tony Award-winning Peter and the Starcatcher captures the imaginations of children and adults at the Zeiterion Theater.

Once upon a time in a land far, far away three bright red caravans rolled down the cobblestone streets of a sleepy whaling town. Little did the townspeople know, a miracle was just beginning to unfold.

The evening was not all make believe and happy endings, “everything ends…and so our story begins.” An underlying tone of seriousness and openly existential musings tell the story of how a boy never grew up, creating an impactful depth to the light as a feather story of flight and fancy that is Peter Pan.

A company of just 12 actors armed with household rope, paper boats, and a ladder use traditional storytelling techniques manage to transcend their means with the ingenuity of Donyale Werle (Scenic Design) and Steven Hoggett (Movement).

“And use your thoughts to hoist the sails and deck the ships awaiting us this early, gray,and misty dawn in 1885…” 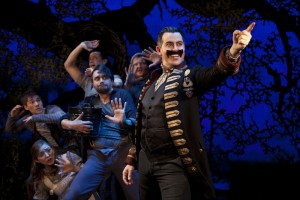 There is a sense of trust the actors invest into the audience, to take their word that this rope is a glimpse into Molly and her Nanny’s cabin aboard the S.S. Neverland, or that these paper triangles are the jaws of a ravenous Tic Toc the Croc. The simplicity in this mode of storytelling, as it was long done before actors commonly flew across Broadway stages above complex pyrotechnics and elaborate costumes, truly invites the imagination to be an active participant rather an a passive observer left in the dark beneath the stage.

Adolescent humor infuses the performance with levity and laughs. Fart jokes, a chorus line of men dressed as mermaids and endless puns whip the audience into a hysterical joy shared by the youngest and oldest members alike.

The audience that evening was comprised of many parents with reluctant teenagers in tow, some children as young as five years old, and several of the Zeiterion Theater’s regular attendees. While it may have taken time to gain momentum, by the end of the night the entire theater was on its feet for three rounds of applause. 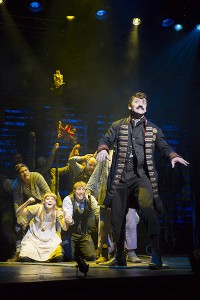 This re-imagining of the origins of Peter Pan is truly inventive in its approach as well as its execution. The humor is spot on, the plot enticing, and its characters perhaps even more memorable than before. The evening transported guests to another time and place, where the Zeiterion Theater transcended our own historic Union Street and truly became a fixture in each of our own versions of neverland, where we suspend disbelief and live in a present without constraints of our own realities.

Adults left with a sense of understanding of a long-treasured story, and children with a sparked curiosity for what happens to The Boy next, begging to dust off the packed away VHS copy of Disney’s Peter Pan their older siblings left behind. A sleepy little girl mutters, “this was the best bed-time story ever” as her father carries her out of the theater in his arms.

Performances like this are few and far between, and not to be missed. Check out the upcoming schedule of other magical performances coming to the Zeiterion Theater at www.zeiterion.org

While the S.S. Neverland has embarked upon the rest of its national tour, for more of Peter and the Starcatcher visit www.peterandthestarcatcher.com and keep an eye out for developing news of Disney’s upcoming film adaptation of the Broadway musical play to be directed by Gary Ross of The Hunger Games films.