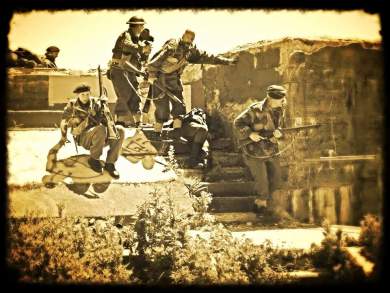 The Fort Taber Fort Rodman Historical Association, Inc. in cooperation with the City of New Bedford are sponsoring its 8th annual WWII living history camp Saturday, June 27 and Sunday, June 28, 2015 as part of the continuing recognition of our WWII veterans.

The camps will be open, free to the public each day. Re-enactors representing American, British, Canadian, and German soldiers will provide a living history camp outside of Batteries Walcott, Gaston, and Cross inside of the City’s Fort Taber Park (Fort Rodman). A battle demonstration will occur each day and several WWII era military vehicles will be present on display.

A special WWII Veteran reception is planned for Saturday, June 27. The event will be held inside the museum from 5:00PM to 7:00PM. All WWII Veterans and their family are invited to attend.

The Fort Taber ~ Fort Rodman Military Museum will be open on extended hours during the weekend.

World War II began on September 1, 1939, although many areas were already under combat conditions before then. Victory in Europe or VE Day was declared on May 8, 1945. Victory over Japan occurred four months later on August 15, 1945 although the formal surrender did not take place until September 2, 1945.

The war was a global conflict. Estimates for the total casualties of the war vary, because many deaths went unrecorded. Most suggest that some 60 million people died in the war, including about 20 million military personnel and 40 million civilians.

The Fort Taber ~ Fort Rodman Historical Association, Inc. is committed to assisting in the restoration, reservation and perpetuation of Fort Rodman and its surroundings and demonstrating how this fort is representative of the development of coastal fortifications from the Revolutionary period though the mid-20th century. The Association also is dedicated to preserve the memory and legacy of our area veterans and their service to our nation.