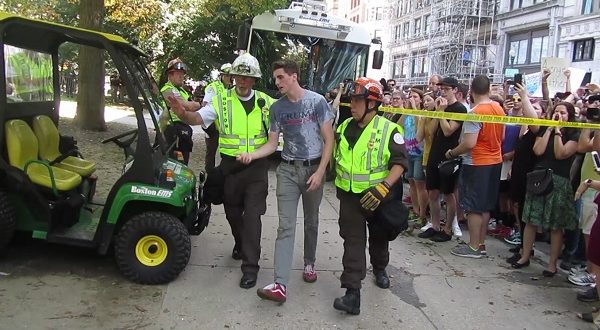 The things that I heard gave me an odd sense of hope. Because the messages I heard as a mere “neutral” observer were for good. For the good of humankind. And denouncing evil wholeheartedly for all to hear. Especially our enemies.

The Boston Police Force made their presence felt. And I heard both admiration for the cops and calls to “put down the sticks.” It certainly felt that the majority of people did not want things to get physically violent though, even if they were critical of the police force. And so, most made up for it with their language.

What made the event, to me, were the little things. The little looks into people’s human nature amidst all the chaos. From a Black Lives Matter speaker nearly bursting out into laughter whispering to her group offstage to grab the mic from her because she was running out of chants to call for. To the police officer I saw let out a half smile when making eye contact with my camera lens. To the guy who subtly let me know he smoked weed after a 2 minute heartfelt speech preaching love of your neighbor. It was the smallest of gestures that made me feel hopeful and safe throughout the Free Speech Rally.

Over the past couple of days, I’ve been able to gauge how the average citizen in our community viewed what happened Saturday. In some cases, I was able to see some of the misconceptions as well.

And so, I wanted to share the 5 things that I personally took away from the Free Speech Rally in Boston.

#1- The Police Force were the first and last group I encountered in Boston.

I mentioned earlier that I felt safe during my time at the rally. I parked at a garage a few blocks away from Tremont street, and recall walking past police officers on every sidewalk leading up to the common. There were times where I was shoulder to shoulder with hundreds of people while men with batons and face guards firmly walked us back to clear room for police cruisers to escort people out of the park. In the faces of people yelling for them to “drop the sticks”, the officers that I filmed remained focused on maintaining order, not on arguing with citizens. Truthfully, it came as a surprise to me that some officers were unfortunately spat on and struck with bodily fluids. I did not witness this, however, as I feel the majority of the event was a legitimately peaceful protest. I greatly value and appreciate the work that the Boston Police did to keep the average citizen safe on that day.

#2- Trump supporters were a minority at the event, and people were vehemently vocal about their disagreements.

I managed to record a young white man with a pro Trump shirt in a sea of angry citizens just outside the common on Tremont street. Shortly after I noticed the man, I saw him get escorted out of the crowd by two officers in bright green vests. He had been doused in water(?) but was visibly being consoled by officers, and his escorting into the park was met with even more intensity from the crowd.

I’m not entirely sure what words were exchanged leading up to his escort, but the point is that it felt like most of the people in attendance were anti-Trump and not afraid to show it. I don’t condone throwing anything at someone because we disagree, but I also can’t speak on what this particular Trump supporter had heard and said prior to this incident. Fortunately though, it did not escalate further.

Physical violence was not the intent of the majority of common-goers, but when it did get physical the police stepped in immediately and effectively.

#3-The Black Lives Matter speakers were genuinely positive and supported by the majority of common goers.

From about 1:30 to 3pm on Saturday afternoon, the north side of the common was packed with pro Black Lives Matter people. The speakers I heard were preaching messages of embrace, acceptance, and activism. Speaking out to express one’s power and voice for the bettering of the whole community; not for just one part. There were messages of anti-white supremacy, and even signs (which I’ll get to) saying “white people don’t matter as much” being held by white people.

As someone who has viewed people as naturally equal to one another regardless of race, these signs did not change my own opinions. The speeches of the Black Lives Matter groups, and all of their intricacies, did not change my own opinions. Rather, they brought to light new perspectives that have further solidified occupancy in my own heart, through my own activism in showing up to record. I looked around me and saw people of every color and creed chanting in unison messages of love, throughout the park. And that is a fact.

#4- The signs were ridiculously entertaining.

“Those boys ain’t right”-Hank Hill. The now oversaturated Donald Trump clown meme galleries would suggest it might be hard to find quality fresh content. But the rally added a few more novel ones to the bunch. Anti-Nazi and Anti-KKK signs lit up the common neo-green and yellow that day. People took time to creatively construct their messages by hand, and it definitely kept my eyes open and will years from now when I look back on the pictures I was able to take.

And last but not least…

I attended the rally with a friend of mine named Dallas. Dallas is physically disabled and therefore was attending the rally in a wheelchair. I was there taking pictures and video, but in between I would walk with Dallas to new locations throughout the common to get more of a scope of the action. And during the event, Dallas recorded 64 hugs from different individuals, as he was wearing a “free hugs sign.” This isn’t counting the handshakes he received either. We even managed to get good video of a guy at the common who had a powerful message in response to the free hugs.

The few that I saw decline his invitation to hug used polite “curves” that we laughed at; like a Trump supporter who claimed it was too hot for it. Oddly enough, an older Trump supporter was one of the 64 people.

And so it’s confirmed, one of my takeaways is that despite perceived “animosity”, people still like hugs.

Just as much as free speech perhaps.