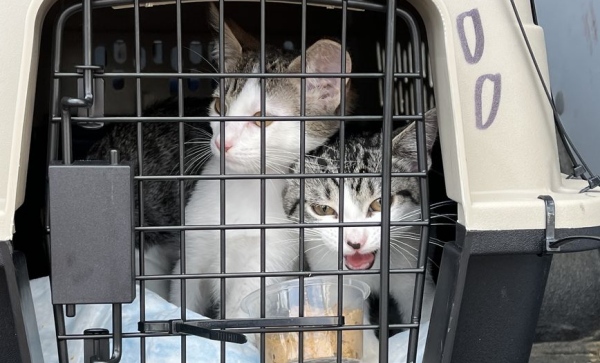 On Tuesday approximately 150 homeless cats and kittens arrived in New Bedford from Florida as part of the MSPCA’s “Southern Hub” transport program. Florida has a high population of homeless cats and their shelters are overwhelmed. The program provides a lifeline for these cats by transporting them to Massachusetts where they are put up for adoption.

Florida has an overpopulation problem because its climate is conducive to year-round breeding. Because Massachusetts’ weather is not conducive to breeding all year, a deal was struck to bring the cats up north.

Planes are utilized by Greater Good Charities because transport aboard a truck would cause undue stress on cats. The 150 cats were sent to different MSPCA care and adoption centers in Boston, Centerville, Methuen, and Salem where they will undergo a 48-hour isolation, then health checkup before they can be released to potential parents. All cats will be spayed or neutered.

All photos by the MSPCA: